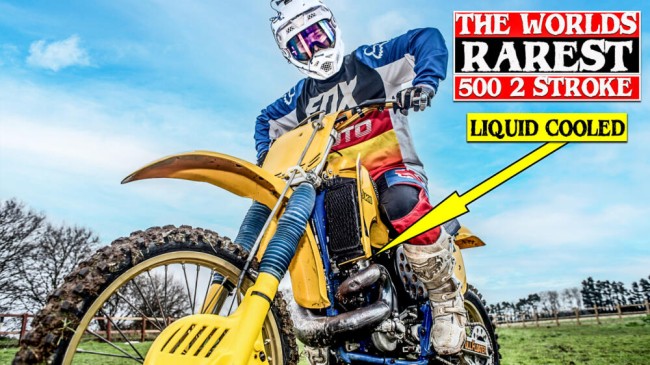 It’s no secret that the guys over at the 999Lazer YouTube channel love their 2 strokes, but even they can’t contain how excited they are about their latest video! There are a few very rare, very exotic dirt bikes that people always talk about –  like the Honda HRC500’s, Kawasaki SR500’s and the Yamaha YZM500’s. But what if there was a 500cc machine out there that very few people even knew existed?

We’re not talking about a DIY shed built hybrid, but a machine that was ridden by legends like Harry Events for just one season back in 1983.  Check out this incredible story and see if Max can justify whether he has found the “World’s Rarest 500cc Dirt bike” ….and he event gets to ride it!

Update: In the meantime, we received more information about this Suzuki from various sources. From Harry Everts himself, we learned that he never rode this Suzuki. Another reliable source told us that this water-cooled model is just a home-made copy of the factory RN500 water-cooled bike from 1982. The RN500 was built in Japan and tested by Eric Geboers, André Vromans, Harry Everts and Michele Rinaldi. Suzuki stopped production at the end of 1982. In 1983, Rinaldi was still riding this bike even though he no longer had a contract with Suzuki. The water-cooled Suzuki is thus a Belgian homebrew project that was only used in local competitions.