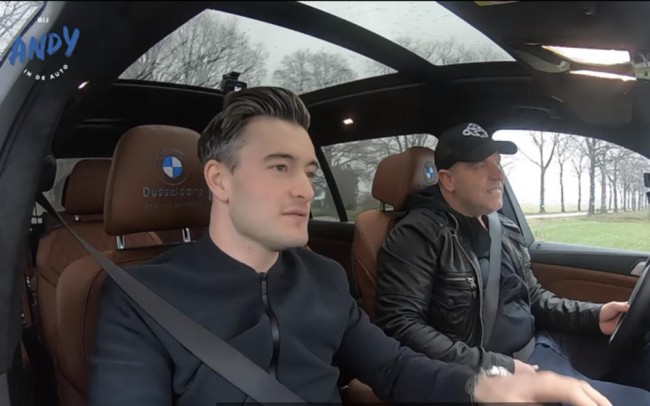 A different but very interesting interview with Jeffrey Herlings as he goes for a drive and discussion about his career with former, Ajax, Everton and Inter Milan player, Andy van der Meijde. The show seems to be pretty mainstream in the Netherlands with the likes of Romelu Lukaku previously appearing on the show!

Herlings talks about his home, getting injured so much compared to other riders and also reveals that he earned 4-5 million before tax in 2018 when he became MXGP world champ but he shows he is pretty smart with his money and hasn’t partied it all away.

“I’m made out of gingerbread,”confessed the often injured Dutchman who could be closing in on Everts ten world titles if not for his injury record. “The problem is that I’m the fastest most of the time. There are other guys in my class who fall in their face ten times more than me and they get up as if nothing happened.”

“My only problem now is my foot,” he says of all the injuries. “The doctor says that there is a lot of cartilage between the bones, but two bones exploded so that is gone now.”

On a rare chat about his dad Peter, Herlings said: “My dad was a hard worker but didn’t have the talent. He didn’t have the talent but he was fighting for it, he was pretty good in the Netherlands but could never make the step to world class. He did go around Europe for the World championship but never on the highest level.”

Herlings says he didn’t want to go and live in Monaco or somewhere to avoids taxes because he likes living at home but he is smart with his money. “I want to live in the Netherlands. I pay my taxes, no worries. I can go to bed just fine knowing everything is paid. No thoughts going round, no headaches.

“I’ve never been stupid I’ve never went out. I don’t drink . I can drink anything I want, I don’t have any races, but I don’t care about it, I don’t give a lot of parties. I also didn’t buy expensive clothrs. I never threw money away. Cars are a thing but I also made se good deals with that.”

“I never did anything crazy and I’m glad about that now I’m older.. You see a lot of soccer players, earned so much money and wasted it all. I’ve made a lot of mistakes in my life but not financially. I have good plans, great people around, I still do.”

Watch the full show below and see how the switched on Herlings (who you can see testing for the new season here) is protecting himself financially with his latest investments: