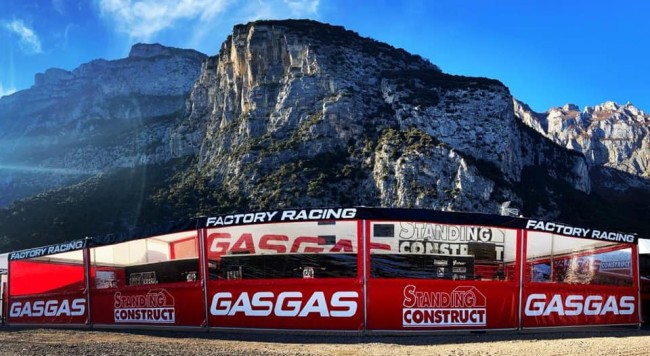 Standing Construct GasGas will further develop and differentiate the MC 450F from both KTM and Husqvarna machinery during 2021 even though the Belgian team are still waiting on a new chassis concept for the motorcycle that has already tasted MXGP Grand Prix success.

The squad were the first to run the red bikes in the latest brand acquisition by the Pierer Mobility group and despite a fast turnaround to have presence at the highest level of international motocross racing in 2020, Glenn Coldenhoffwas able to deliver victory at round three of the campaign in Latvia.

For 2021 the team, led by technician Wim Van Hoof, will have a new rider roster with Pauls Jonass and Brian Bogers bring their respective Husqvarna and KTM experience into the fold. Tim Mathys’ crew had been running Coldenhoff and Ivo Monticelli for two successive seasons. Bogers, in particular, filled test rider duties for KTM in 2020, including further experimentation with WP Suspension’s resurrected air shock technology. The company had shelved the air system near the beginning of the last decade but have made further progress with the hardware, to the point where it was used on Justin Barcia’s MC 450F to win the opening round of 2021 Supercross in Houston. Bogers is expected to race in MXGP with the shock while Jonass still has to switch from the conventional spring.

Standing Construct are going through the initial set-up phases with the Latvian and Dutchman. “At the moment we are still riding with mostly the same set-up that Glenn and Ivo were using last year,” Van Hoof says. “Brian as well, he was riding the factory [KTM] bike for the last six GPs between Lommel and Arco in 2020 and he commented that the GasGas was a step for him.”

While Van Hoof says that a new GasGas frame is “still not quite ready” the team themselves have marched ahead as vanguards for GasGas’ technical identity. “There have been changes: we’re using quite a different link system and the shock also,” he adds. “We tested on different tracks and the riders were happy because they felt the bike would not ‘surprise’ them. They are more confident in the shock. Engine-wise and chassis-wise we found a really good base in 2020, and this was confirmed by Paul’s comments because he is another top rider. He gave us confirmation that we’d done a good job. Now we have a few small things to tick in the next direction.”