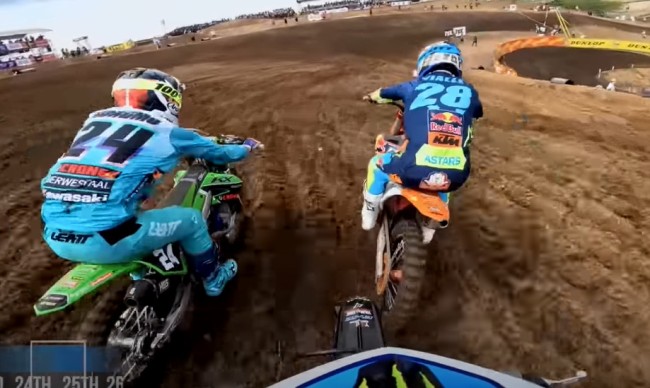 Jago Geerts, who is being heavily linked to Red Bull KTM for next season, lost the red plate in Indonesia after few crashes ruined his weekend despite having the speed to go up against Vialle. The Belgian heads into Loket four points down but still very much in this enthralling title fight with Lommel the week after Loket!

Geerts said: “Today was a difficult one. First moto, I felt good on track and had good speed. I was chasing Vialle but made a small mistake and lost a few seconds. Second heat, I crashed in the third corner, but came home in fifth after two more small crashes. I’m not happy with the result but my feeling was good on the track. We just need to work on the starts during the break.”

See Geerts moto one below when he was closing in on Vialle until he hit the deck:

See Tim Gajser’s epic first few laps in race two as he poured on the speed to get by rivals Febvre and Prado:

Podcast! Jonathan McCready and Andy McKinstry look back at the Indonesian GP and discuss rider entries, the racing and the track. We also look back at the opening four rounds of the AMA Motocross series and the curious decision for KTM not to pay Cairoli to do the full championship. Listen on iTunes here.