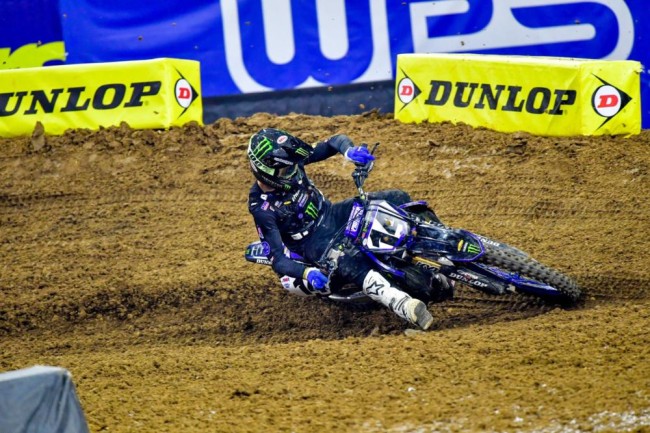 Dylan Ferrandis put an excellent and brave pass on countryman Marvin Musquin in the heat, squeezing around the outside in a move that could have left the Star racing Yamaha rider on the deck if it had went wrong!

Ferrandis isn’t afraid to take risks as you can see in order to get where he wants to be:

On his unexpected podium in the main event after brilliant ride through the pack, Ferrandis said: “I never expected this race. It’s a big surprise to be here on the podium, honestly. I always work really hard and it looks like it paid off. I gave everything I had all the way to the checkered flag. We had to think a lot on the bike to be creative and find new lines and to try and do some different things on track to be better. I wasn’t trying to rush anything and some guys made mistakes. I was on a good pace and finished second, which is unbelievable. A big thanks to my team that has put in so many hours for me in the last few weeks because I couldn’t ride before. We had to do a lot of stuff in those last two weeks before the race. So it’s unbelievable to be here.”

Meanwhile teammate Malcolm Stewart wasn’t happy with his performance:”I kind of struggled a little bit with the track all day. In the Main Event, I didn’t have the best start but I made it work in the first couple of corners and put myself in the top five right off the rip. I tried to get around (Justin) Brayton but was not really moving forward. Honestly, I made a few mistakes. It was a little tough, conditions wise for a lot of people and me as well. Sometimes tracks that you’re not really comfortable on, things can happen. Looking at how many people hit the ground tonight, overriding and stuff, to finish seventh out of all the carnage is not bad. Leaving here with a seventh, it feels like I got 15th, but I feel like I know what I need to do. I learned a lot tonight. I have a couple of days off so I’m going to watch some tape and sit down with the team. I’m happy with everything. We’ve got the bike really well, I think it was more on me tonight and I just didn’t jibe with the track really well.”

And it wasn’t a good day either for Aaron Plessinger after a crash in the main event impacted his result: “I got off to a pretty bad start in the Heat race and didn’t come through the pack that well and ended up eighth, giving me the 16th gate pick in the Main which is not too ideal. I got a pretty good jump and drove it in pretty hard. I felt like I came out decent for what it was. Coming through the pack I went to pass (Jason) Anderson and hit an edge in the whoops. I jumped onto the hay bales – it was like a step on step off in the hay bales – and then I jumped into the base of the finish line and stopped then just kind of tipped over off onto the concrete. It was a wild ride. It could’ve been a lot worse. I’m feeling pretty fortunate to finish tonight. We’ll be back Saturday ready to rip and get those starts dialed.”