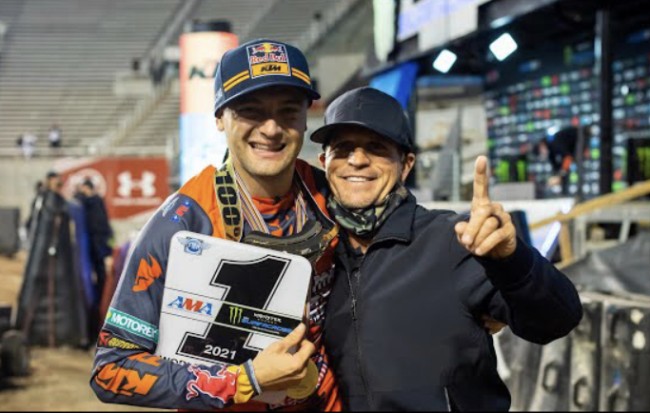 Aldon Baker isn’t a big believer in fun if you want to be a champion.“I don’t believe in this sport you can have so much fun. You are either all in, do it, then afterwards go have fun. I don’t see how you get that balance.”

Those words in his interview this week with Daniel Blair on Supercross Live probably explain why riders burn out and why guys like the fun-loving Ken Roczen and Jason Anderson don’t stick with the gruelling program. But one thing is for sure, Baker’s way works in America if winning means everything to you.

And the legendary South African trainer says a dedicated rider motivates him too even after two decades of championship success with the best riders in the States: “It’s the rider I’m dealing with, I feed off the rider. When I see what they are prepared to put on the line and how much they are prepared to give up, that drives me. I don’t want to be that little piece that isn’t pulling my weight.”

Speaking about his latest title winning rider, Cooper Webb, Baker said dealing with adversity like after his bad race at Atlanta 1, is one of Cooper Webb’s biggest strengths. “One thing with Coop, and that what makes him a champion, is out of those little negative situations he almost finds another way if feeding off it. He was more motivated than I had seen him in a long. That particular deal, I saw almost another step I hadn’t seen in a while.”

“I don’t want to say that he wants it more than anybody else because they all want it, there is no doubting that, but to what degree you want to put on the line to get that, that’s what is separating him. It almost the little negatives that drive him to become so dynamic in the crunch situations.”

Watch the full interview with Daniel Blair including Aldon’s cycling career below: