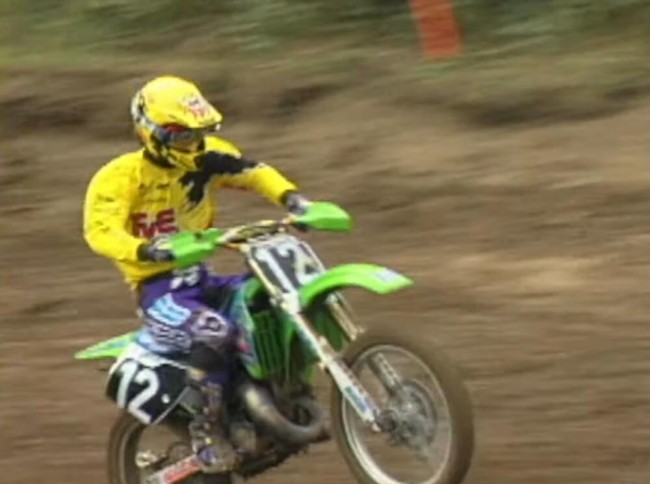 After team GB won in 1994 to break the 13 year US winning streak, the Americans were up for revenge the following year at a picturesque and undulating circuit at Sverepec, Slovakia but Belgium with two world champs and vice world championship, refused to be denied as the Beglian heavy weights of Stefan Everts, Marnicq Bervoets and Joel Smets on the novel four stroke Husaberg put Belgium back on top of the world.

And by the 90s GP men weren’t intimidated by their US counterparts firmly believing they were as good or better as the new elbows up attack position techniques from America in the 80s were now being implemented by the new generation of GP riders like Everts, Tortelli, Puzar, Bervoets, Malin and Chiodi.

Just check out this interview from Everts (who dropped down to the 125 class despite being 250 world champ), after finishing second to the Tortellil in the first moto – and passing 1995 US 125 champ Lamson: “He’s supposed to be best in the States but I think he was a little bit too slow to race the GP guys.”

With the likes of Demaria, a flying Tortelli, Puzar, Bartolini, Chiodi, Emig, Hughes, Lamson, Nicholls, Malin, Beirer and more racing, it really was a star-studded field of 90s legends!