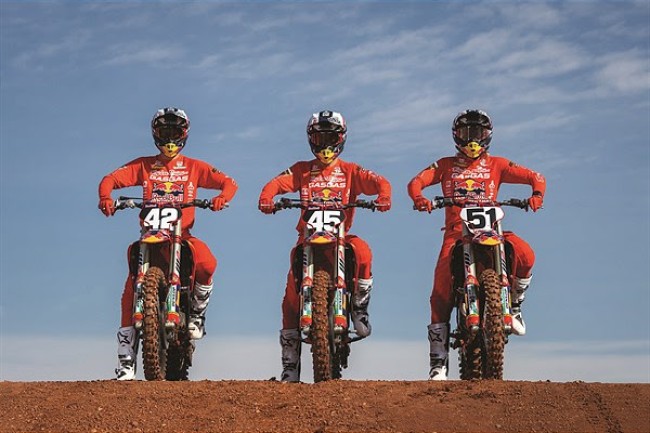 The Troy Lee Designs/Red Bull/GASGAS Factory Racing team has enjoyed a few weeks off from racing but it’s time to get on the gas with the start of the 2021 AMA Pro Motocross Championship this weekend in Pala, California! Team riders Justin Barcia (450MX), Michael Mosiman and Pierce Brown (250MX) are all healthy and eager to move outdoors for GASGAS Factory Racing’s first season in U.S. motocross.

Coming off a great supercross season, Barcia is energized and ready to take on the outdoor season with a dialed in MC 450F machine. A rider best known for his ‘on the gas’ riding style and incredible ability to storm the season opener, Barcia will celebrate his 10th season of 450cc competition where he looks to deliver his best results yet. And with ‘BAM BAM’ there is never a shortage of fun, so fans can expect to see the #51 all smiles in the paddock this weekend at Fox Raceway.

In the 250MX division, teammates Michael Mosiman and Pierce Brown will hold up the Troy Lee Designs/Red Bull/GASGAS Factory Racing team flag once again this summer. Entering his fourth 250MX season in 2021, Mosiman will use his veteran experience to put himself in the mix up front. For Brown, his professional MX experience only ranges through a handful of races since his initial debut in 2019 but the young rider plans to establish his name among a class full of talent this season.

Tyler Keefe, Team Manager: “Heading into the outdoor season, we’ll be racing in both the 250 and 450 classes. We’re really excited to go racing with Justin Barcia in the 450 class, he was incredible for the brand and the team in supercross, getting a 450SX Main Event win and we would like to get some outdoor wins as well. MX fits his style a bit more being on the gas, wide open and having some fun. In the 250 class, both guys are healthy – Pierce Brown and Michael Mosiman – and we expect some good results out of them. We think they should be on the podium and trying to go for some race wins. Pierce has only done a handful of outdoors before but he’s gained some experience since then and he’s fit, strong and having fun so I think he’s ready to go. Mosiman is a little bit more experienced and he has the speed and endurance in him, so I think this will be a good summer for him as well. I’m looking forward to it, let’s have some fun!”

The 12-round AMA Pro Motocross Championship kicks off this Saturday, May 29 with the Fox Raceway National in Pala, California and makes stops all throughout the U.S. before rounding out the series in Northern California on September 11. For more information on the series and how to watch, visit www.promotocross.com.