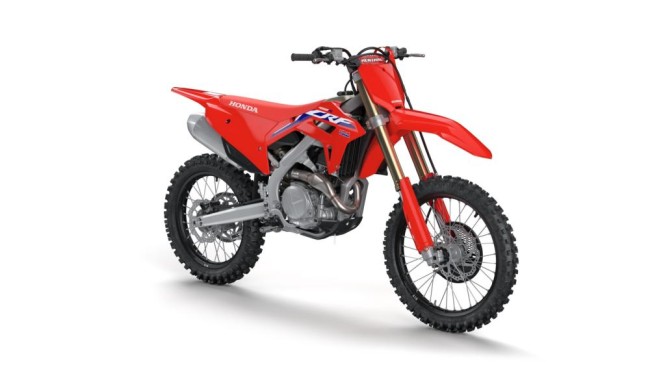 Check out the images and Honda’s blurb on the latest CR450 model!


LIGHTER, NARROW FRAME
Great handling starts with a superior frame, and
that’s one place where the CRF450R’s chassis
puts you out front. First, it’s light—over a pound
and a half lighter than the previous generation’s.
By making the frame’s main spars narrow, we
save weight, but more important we make the
chassis more responsive by fine-tuning the
lateral rigidity. The result is a bike that gets into,
around, and out of corners faster.

HYDRAULIC CLUTCH
The CRF450R features the first hydraulically
actuated clutch we’ve offered outside of our
works bikes. Made by Nissin, it’s the same
design as in our Grand Prix MC machines, and
performs better than third-party conversions.
You get a clutch-lever pull that’s ten percent
light at its peak, even though it’s paired with a
new, stronger 8-plate clutch. Plus, you’ll never
have to worry about making a clutch-cable
adjustment, even during the longest events.

SEALED AIRBOX AND FILTER
Along with the special air filter, the airbox shape
helps deliver more torque. You can access
the airbox through the left number plate. And
because the new filter has no rubber gasket
where it interfaces with the intake boot,
cleaning and servicing the filter is faster and
less messy than ever