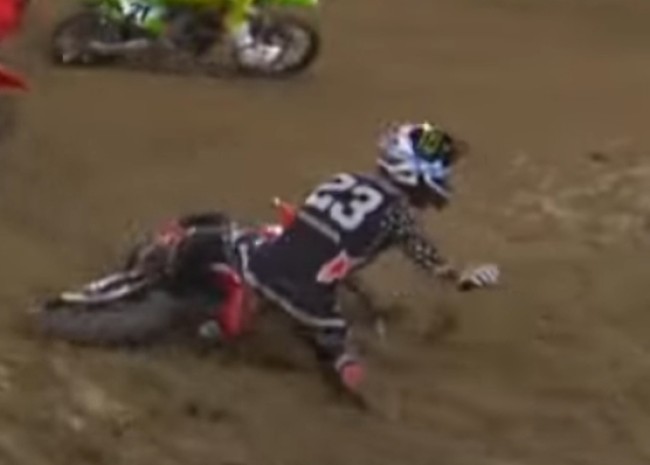 Chase Sexton had to go to the LCQ after a crash in the heat race that saw his bike get run over and his petrol tank destroyed, luckily he was uninjured and came back to win the LCQ and get in the main event.

A decent start despite being on the outside kept Sexton in the hunt at the start of the main until Justin Barcia then wiped him out and Sexton had to come from the back of the top ten to fifth, with Roczen and that man Barcia within touching distance at the flag.

Malcom and Sexton down early 😱

Barcia said of the contact: “Track was tough, had a pass on Chase and I was so bummed he went down, we came together so hard after the triple. That’s where Jason got me too, and it’s juut one of those corners when it’s left open and we come together so hard, that was lame. I hate it, I threw my hand up because we are buddies, I hate that, don’t want to have that happen – no fun.”

Overall, a 3-5 to start the season isn’t bad for the factory Honda star, but Sexton certainly had to dig deep in San Diego after everything seemed to be going wrong. He limited the damage on what could have been a night that saw his title hopes take a hit.

Sexton told Jason Weigandt in the Weege show about the Barcia incident: “There’s not much you can do with that, because you are going to get the same thing every time. I actually talked to him before the main event, he took me clean off my bike. I don’t know, you kind of expect that from him. I didn’t know he was behind me.” Full chat below: