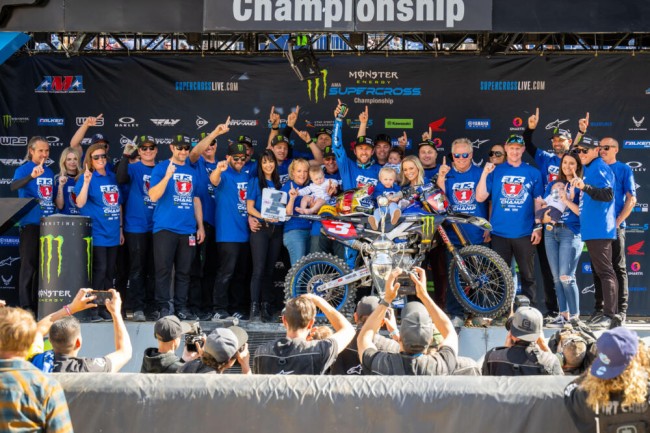 Eli Tomac revealed he has been riding with a bad knee injury sustained in Atlanta that accounted for his recent off the podium results, with Tomac wrapping up the title at home in Denver despite dropping from first to sixth.

Speaking after wrapping up his second supercross title Eli said: “I was pretty calm (today). I was more freaked out in Atlanta and Boston because my knee was jacked and it is still not great. I was pretty stressed out right there and I didn’t ride last week at all.”

Tomac said of his title: “It’s unbelievable. I think back to deciding to make this change and aligning myself with this team and crew we have. You dream about doing these things nut for it to come into real life, it makes you speechless. It wasn’t the exact finish of these last couple of races that I wanted, I wanted to give the Denver fans more, they were thr best crowd we had all year and engaged in the race.

“Thankfully I was in the position to make those decisions (going to Yamaha) and align myself with those people and that crew and it worked. They were able to provide me the tools I needed and we are on the same page that way and that ends in good results.”

On if he would race next year Eli said: “I’m not saying I’m not racing next year, I’m trying to sign my next year (deal), that’s in the world so heck yeah I want to keep going.”

It remains to be seen how this injury will affect Eli Tomac in the upcoming US Nationals but Tomac has the won the most prestigious title in the US already this season and, just as he has in the last couple of weeks, will no doubt make the right call when deciding if he can race the outdoors, especially if he is planning on signing a contract to defend his supercross title in 2023.