Tomac on his win – we needed that! 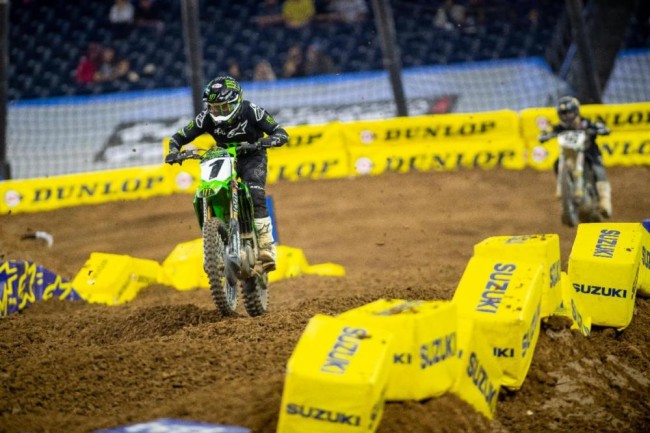 Eli Tomac admitted that he was stressing after his 13th position at round one but bounced back in style to take the win after the two young guns, Sexton and Ciancarulo, crashed out ahead of him. Tomac wasn’t the fastset guy but he was the calmest, making no mistakes and taking the win he said he needed.

“I was mostly in my own world, said Eli on the carnage of the night. “I was aware of the guys behind me, the stuff up front, it was wild to see two crashes in the one spot. That sand there was almost like a little rut or edge was kind of coming up out of the sand, it must have been hiding under and I think it bit both Chase and Adam, that was a gift that way.”

“After that it was trying to maintain. Zach was coming in strong too, I was kind of pacing myself until halfway then I tried to go harder after that, I’m like, ‘I got to get going, he’s catching me,’ then he made a mistake too. It was one of those nights, that many laps, Dylan was coming on strong too but clean air was huge tonight.

“I was stressing out to be honest,” said Tomac of his poor first round. “16 points is horrible after round one. That’s a terrible hole to be in. I was pulling my hair all day…. That [win] was so huge for us. the start was so huge for us that time. Yeah, we needed that.”

But he admits the stacked field is going to make life more difficult this season with no-one really able to separate themselves. “It’s going to be heard to come through he field this year, really hard, especially if we keep all the guys in there. It’s tough, everyone is getting a little faster, a little bit closer to each other. If you look a the times in practice, if you look down the list it’s 12 guys in the same second, in the past it was maybe two or three that really have the next level.”