Tomac on his Southwick win 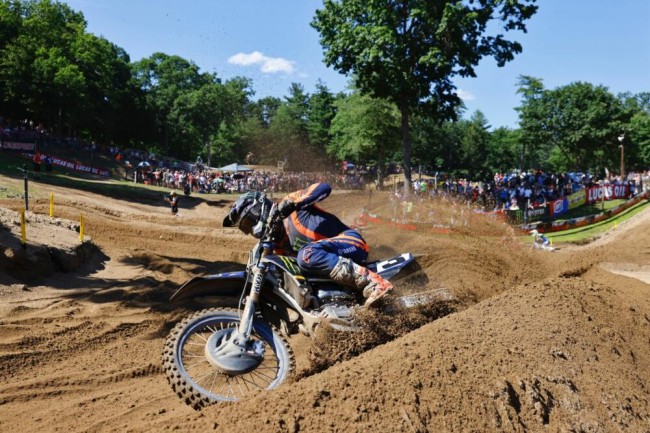 Monster Energy Yamaha Star Racing’s Eli Tomac continued his winning ways at the Lucas Oil Pro Motocross Southwick National, earning victories in both motos, which brought him within one point of the 450MX class championship lead. Christian Craig enjoyed a good day at The Wick 338 in Southwick, Massachusetts, running up front during the first moto before finishing out the day with a 3-8 for fifth overall.

The day started out positive for Tomac, who qualified on pole for the second-straight round aboard his Yamaha YZ450F. When the gate dropped on the first moto, Tomac found himself shuffled outside the top five in seventh. He steadily picked off the competition and eventually made it within striking distance by the seventh lap, passing two riders during Lap 8 to take over the lead. Tomac would keep pushing to have a seven-second gap by the checkered flag. The second moto was a close copy of the opening moto, making his way from fourth to first by the eighth lap and taking his fifth-straight moto win by 10 seconds. His 1-1 effort pulled him within just one point of the championship standings as the series just crossed the halfway point in the season.

For a track that Craig generally doesn’t jive with, he showed he was not going to let that define his day. After qualifying eighth, the Californian got a great Moto 1 start in second and took over the lead just three laps into the race. He maintained the lead for nearly half the race before a few mistakes pushed him back to third, where he ended the moto. In the second moto, Craig got another great start in second, but the punishing conditions took their toll, and he ultimately finished eighth to score fifth overall.

Tomac: ““It was an awesome day at Southwick. It really couldn’t have been better. In Moto 1, I didn’t have the best start, but I was able to come through the pack and make quite a few passes early in the race and get to the front. In Moto 2, I got a much better start. Here you kind of have to be gritty and really go for it the whole moto. It’s definitely the hardest track of the year physically, so you just have to tough it out. It was a pretty special day for us to go 1-1, and I’m proud of the team. We made a few small adjustments in practice to get everything dialed, and it paid off.”

“I’ve never really been great here at Southwick. I’ve had decent results but never really gelled with the track, so I really wanted to do well this year. We qualified decent, and in the moto’s, I got off to two good starts and led the first moto for almost 20 minutes. I made a couple of big mistakes that cost me huge and was shuffled back to third and stayed there. I was pumped with that as it’s been a while since our podium at Pala.

“Then, in the second moto, I was optimistic and got off to another good start in second, but then right away, I just knew my energy was gone from the first moto and that I was going to suffer. No excuses, though. The bike was good all day; it was just that my energy wasn’t there for the second moto. I was shuffled back to eighth and got fifth overall, but we gained a little bit in the points and had some positives today.”

Coker: “It was an absolutely amazing day for the team to have a double podium in that first moto. It also felt really good to have Christian back on the podium where he belongs. He gave it everything he had in that first moto and just, unfortunately, didn’t have enough in the tank for the second moto but still rode well and ended up fifth overall. Then it was an amazing day for Eli with another 1-1 finish. It was just a dominant effort, and I couldn’t be any happier with the way the whole team worked together on the race today.”