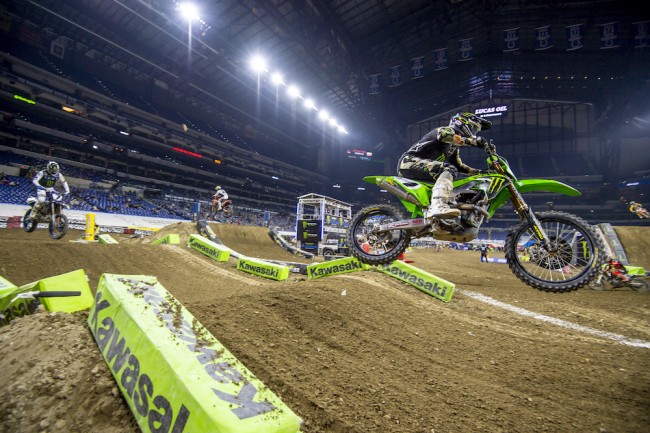 Eli Tomac had a tough night on Tuesday with a relatively poor start meaning he had to come through the top ten to get himself in the podium as title rival Ken Roczen dominated up front. But under the circumstances it was a good ride for Eli who rode with calmness so despite the urgency to limit the damage on what could have been a night to make a big mistake.

Tomac spoke to the media after the race and gave his thoughts in his night.

Eli, we saw Ken get away there, he was stretching out the gap and you got shuffled back in the first turn. How does that affect your mentality? Are you able to just focus on putting in your laps and try and work your way through as high as you can get?

Yeah, it’s not easy! You’ve got to hope for a mistake or something. I know how these races have been going, so when you see the guy that’s ahead of you in points run away it’s like, “Oh man, we’ve got to get going.” Did what we could, though. Came up okay. I think I was eighth or ninth or somewhere around there by the finish line the first lap. I was somewhat happy on the comeback, but obviously the guys that we don’t want to finish in front of us finished in front of us.

You and Justin were going at it for quite a long time. Watching that corner, there was a lot of chance for contact and you guys kept it really clean out there.

Yeah, I felt like the two good passing places were probably after the finish line and then after that triple. I just was never close enough to feel like I could have made a real pass without causing basically big contact or a mess. I passed my teammate there early in the race, but I could never get the right angle and the right run in that area. So that was it. There was a lot of times where we got next to each other, but I would be stuck on the outside and could never finish anything. It was back and forth and close attempts, but never could get it done.

You occasionally see alliances. Some of the guys will have a 250 guy that they lean on for info. We’ve seen that with Colt Nichols and Justin Bogle. Are there any guys out there that you lean on, or are you just watching as much as you can on the big screen, to try and get tips on the track before you guys head out?

“I’m always watching. All of us are watching the whole time. You try to pick up on things, but it’s hard to say. It’s tough. You’ll catch some things. Sometimes it works, sometimes it doesn’t. I personally don’t know many of the [250] guys out there right now so, no.”