Tomac and McAdoo on their Daytona wins! 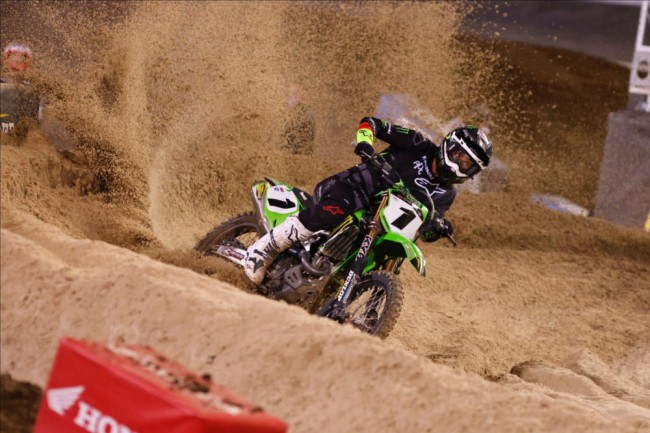 Despite rain and lightning causing a delay in the schedule early in the day, Tomac didn’t let that stop him from laying down an electric lap time of 1:09.2 and qualifying first in the first timed session. Tomac went on to qualify third overall for the day.

As the gate dropped on the 450SX Main Event, the No. 1 KX™450 charged out of the starting gate aggressively and took the lead by the second turn of the first lap. Tomac continued showing great speed as he led the race for all 18 laps from start to checkers, earning his second win of the season. Saturday’s win marks the third consecutive year Kawasaki has won Daytona Supercross and Tomac’s fifth time to claim the top spot, tying Ricky Carmichael for the most wins of all-time at the legendary Daytona International Speedway.

Eli Tomac: “That was fun! I always enjoy riding at Daytona and it’s always been good to me. I was pretty strategic when picking my gate in the main because I was watching the other class and heat races and realized the inside might be my best shot at getting up front, which is exactly what I did. I fought for it too. Once I got out front, I wasn’t looking back. We’re still in this championship, so I’m not going down without a fight. I think we’ve found a good groove and I’m looking forward to our next stop in Dallas. I’m grateful for all the hard work and support from my entire Monster Energy Kawasaki team, I couldn’t have done this without them, especially five times!”

Cameron McAdoo: “That was unreal. That is what we work so hard for. I can’t thank all of the guys at Monster Energy/Pro Circuit/Kawasaki enough for providing me all of the tools to get here. I have such a great team behind me. I have to give a special shout out to my mom because in 2016, she drove me all the way out here to Daytona in a van and now this is where we are. This is just the beginning and I look forward to continue working my butt off for more nights like this.”

Jordon Smith: “Tonight was definitely a rough one. After crashing in qualifying and really being unsure if I would even be able to race the rest of the day, I would say we pulled off a good result. I did my best to fight through the pain and ride as smoothly as possible. I’m thankful for all of the team’s efforts and support I’ve received even throughout my injuries, so I put it all out there for them tonight. I’m hoping to get some rest and then back to work.”

Seth Hammaker: “I felt great all day and thought I was riding well, especially in my heat race. I definitely had some confidence built up after the results of the last race, so I was looking forward to racing today. Unfortunately, I made an error in the sand section in the main event which cost me big time, but something I never do is give up and I just kept trying to make up positions as fast as I could. I want to thank Mitch and the entire Monster Energy/Pro Circuit/Kawasaki team for all their support this far and I’m already looking forward to lining up next weekend in Arlington.”