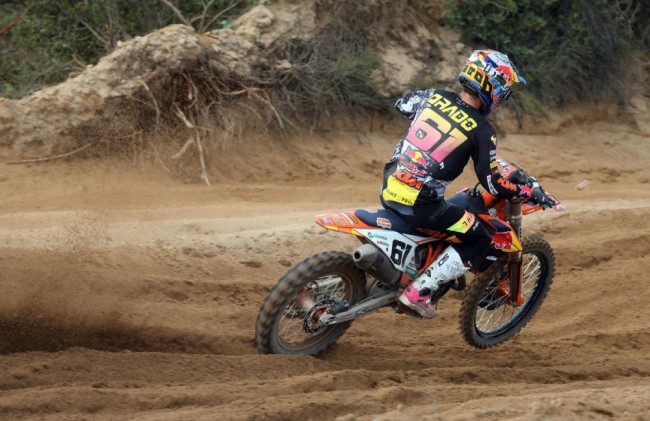 It might not have had as many stars as usual but, under the circumstances, the turnout was still impressive and it was just good to see some of the best motocross riders in the world back in race action!

Yes, supercross is great, the bright stadium lights illuminating the dark winter months with an exciting technical show but by spring it’s nice to see motocross back. The raw, real and pure nature of the sport, the grittiness and toughness it requires immediately evident upon seeing the gate drop for the first time in the new season. A global sport accessible to all but only mastered by a few has finally returned.

Starting off at Riola is no easy task given the depth of the sand, the rolling bumps and big berms, it’s like being thrown in at the deep end of the pool but it’s great to see the riders navigate such a treacherous circuit and a reminder of what makes motocross so great and so difficult.

Well, difficult unless you watch Jorge Prado! The Spanish Everts makes it looks too easy! Two holeshots and fantastic riding, Prado didn’t make a mistake all day, and was able to up his pace when Febvre challenged him, he was a joy to watch once again with his precision on a brutal track. Yes, a mechanical issue took away his superfinal win, but it served as a reminder to his competition that with no winter injuries and a year’s experience on the 450 plus those amazing starts, you are going to have to be on your A game and start near him to beat him – even if you are Jeffrey Herlings!

Ice One Rockstar Husqvarna debutant, Thomas Kjer Olsen, was very impressive. Up to the 450 and riding it brilliantly, Olsen didn’t look much like a rookie. His pace was good, his fitness and speed there all moto evidence by keeping Febvre honest in the superfinal. Olsen looks very comfortable already and this race will surely grow his confidence that the tall Dane belongs on a 450.

Glenn Coldenhoff had a steady start but it sounded like his day went exactly how he wanted, no risks, some race time under his belt and a bonus fastest lap in the second moto to underline the potential of the Dutchman on the Yamaha once he has more bike time and his physical fitness reaches it’s peak. But these races and the time until the MXGP series starts will be a great way to learn more and improve quicker for Coldenhoff.

A big round of applause too for Beta, making a competitive machine so quickly that Jeremy Van Horebeek can go 4-4 in his debut deserves a lot of credit. This is a great start and a big confidence booster to all involved in the project and shows they are on the right track. With the guts of another three months to get even better, the Beta looks to be a viable option for top riders to choose to prove themselves at the pinnacle of the sport.

Fantic also deserve a pat on the back as does Nicholas Lapucci, what a ride for the Italian to push Jago Geerts all the way in race one, battle the 450s in race two and hold off the factory 250 machines to win the MX2 class in the superfinal! Two-stroke fans have new hero!

Mattia Guadagnini also shot himself to the forefront of people’s minds with a wild debut on the Red Bull KTM. The Italian , runner-up in the EMX2 series in 2020, had a huge crash that he was lucky to walk away from but more importantly he showed some fantastic speed, he will be one to watch this season one way or the other – he isn’t afraid to ride on the edge but he has the speed to challenge for the leading positions! Tim Edberg also deserves a mention for a strong day on the Yamaha to take a podium under the guidance of former world champ, David Phillipaerts.

With more factory riders expected to make their debut at the Italian international series in the next two weeks, the championship has come at a nice relatively low pressure time for riders to get their feet wet with time to make changes before the MXGP season starts and allows the fans to finally see some high level motocross once again.