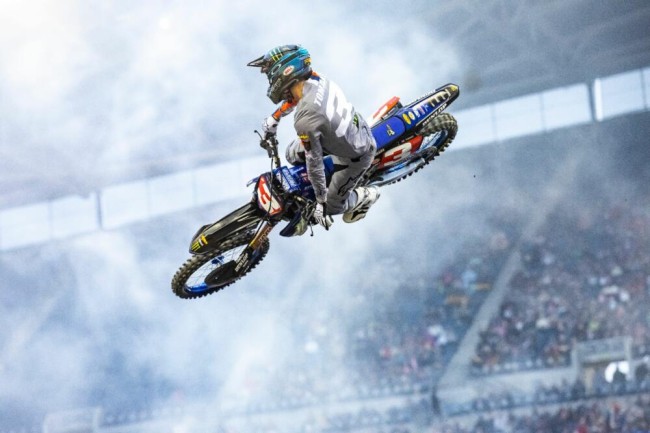 As we look back at the 2022 season, there is one rider that shone brighter than anyone else, Eli Tomac.

What a year for the American who, in what many believed was the twilight of his career, moved to Yamaha for big money then absolutely took 2022 by storm. After early round madness in supercross, Tomac took calm control, showing poise and pace when he needed them and refused to get into the slam fest that overpowered his rivals. Smart.

His outdoor season was an epic battle of pure speed with Chase Sexton and again Eli showed tremendous calmness under pressure as the title came down to the wire to make it an AMA SX and MX double for the first time in his career. And he still wasn’t done!

At his last attempt at the MXoN, Tomac got revenge on what happened in 2018 to add a MXoN title to his collection, then, only a couple of weeks later won the inaugral WSX event in front of British fans in Cardiff after some big battles with Ken Roczen.

It was the perfect season for Eli Tomac, who will now go down as one of the greatest US riders ever regardless of what happens in 2023.

In case you missed it, we caught up with Eli to talk about his season and career in Cardiff:

Another rider who deserves a mention is Tim Gajser.

After the title tension of 2021, Tim Gajser was on another level to everyone in 2022. He was in complete control from the first round of the season with speed under the hood and brilliant line choices when he needed to make passes. He was so dominant he even turned it down a notch mid-season and safeguarded the title before picking up the pace in the final two rounds to remind everyone the speed was still there when he wanted to use it! Tim Gajser was brilliant in 2022.

Another Honda rider who excelled was Jett Lawrence. The kid is special, he got his first supercross title and his second outdoors with impressive poise in the outdoor season. When he was asked a question, he answered it and rode smarter than he has in his career, making great decisions almost every time. He then stepped up tot he 450, a bike he looks born to ride, and ran at the front at the MXON even battling teammate Sexton. Lawerence was also the most popular rider in the pits at Red Bud MXoN, despte being Australian! He is the next superstar of the sport and a joy to watch rider a bike.

The best title battle of 2022 came down to Sexton v Tomac and Vialle v Geerts and I think the MX2 title duel just about came out the winner! After a season of scintillating speed from both Geerts and Vialle, for the title to be decided in the final moto in a head to head duel because Vialle crashed while leading, taking out Geerts, to ultimately seal his second world title, was a script even Hollywood couldn’t have written! It was hard not to feel sorry for Geerts, it was the best year of his career and he ahd the title in his hands, but Vialle’s mental strength was unbelievable he never gave up and made it happen when he really had to deliver. But the level they both rode at all year should never be forgotten, it’s hard to ride a 250 faster than they were going in 2022!

And that brings us to the biggest surprise ride of 2022. Jago Geerts at the MXoN. Under the context of that lost MX2 title jsut two weeks prior, for Jago to spend ten days on a 450 and then come out and ride with a prime Eli Tomac on both the Saturday and the Sunday in contrasting conditions in Tomac’s back yard was truly impressive. It underlines just how good Jago Geerts is and how high the level of he and Vialle were riding in 2022. Geerts blew some minds in America and showed everyone he will be the real deal when he moves to the 450 class in MXGP in 2024. What a performance after the most disappoiintming moment of your career.

We caught up with Jago after the race in this exclusive interview:

So that’s a wrap on the 2022 motocross and supercross season, full of special memories and performances, and certainly a year Eli Tomac will never, ever forget. What a rider.

And we only have a week to wait until it starts all over again!