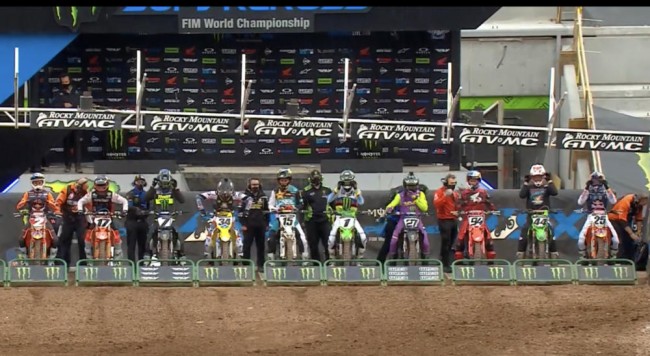 It was a case of Deja vu for poor Ken Roczem who was doing what he needed to do and leading the main even after taking the holeshot with Webb back in third only to go down again with seven minutes remaining to all but end his 2021 supercross title hopes.

Roczen had lost a bit of time to second place Musquin lapping backmarkers, the gap down from nearly three seconds to 1.5 but he still had control until he washed the front end out coming out of a bowl turn getting off the ground to see Webb go by.

Webb then closed in on Musquin but couldn’t make the pass admitting second place is never fun but he is now 22 ahead of Roczen with one round to go.

A delighted Musquin, who took his first win in two years said: “Salt Lake is good to me I won the race in 2019. Unfortunately I had a bad concussion two weeks ago. I can’t believe it right now standing on top of the podium. Kenny was out front and he was not really going away, I was trying to be consistent.”

A disappointed Roczen said: “What do you want me to say? Everything was going to plan, I was feeling good early on, we got into the lappers and I lost a lot of time. I came out of that turn and it just happened so quick, I just lost the front. I’m trying my best, I gave it my all, unfortunately it didn’t go as we planned.”

Malcolm Stewart took third and was flying all night long, even putting the pressure on Webb early in the main event and running the pace of the KTM duo once he got to third for his first 450 podium.

Pro Circuit Kawasaki’s Jo Shimoda kept his 250 title hopes alive with a simply brilliant win and the first of his career, under immense pressure from Micheal Mosiman and then Jett Lawrence.

With Christian Craig out following his practice crash, Shimoda was the only rider with half a chance of stopping Colt Nichols winning the title tonight but he needed to beat Colt by three points or more and, when Nichols got a bad start and Shimoda got the holeshot, it was on!

Jo spent most of race holding off Mosiman who couldn’t make the pass before then holding off his friend and former teammate Jett Lawrence at the end – all with a title chance on the line. Shimoda withheld the pressure superbly and deserves to take the championship down to the final round 23 points behind Nichols who played it pretty smart after a bad smart but only really found his groove halfway through the race to take third.

Young Shimoda said: “I want to say thank you so much to my team and my family, they are here tonight, just imagine coming from Japan with half your family and to compete for the win.”