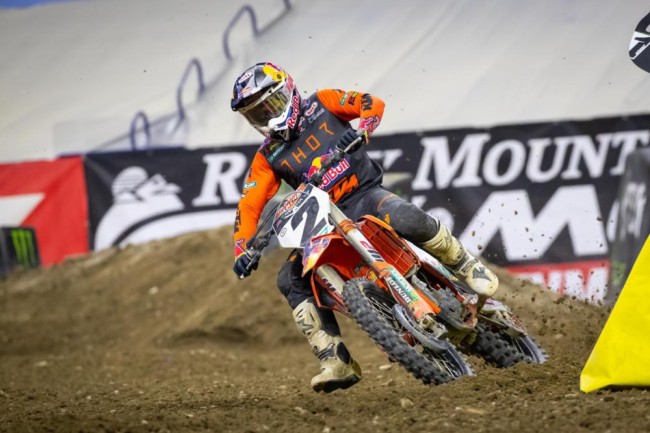 Cooper Webb made it two in a row and is now just six points back in the championship after Ken Roczen suffered a terrible start but clawed his way back to fourth in an exciting and tense main event at Orlando 2.

Adam Cianciarulo took the holeshot and pulled away slightly with Webb second but, after five minutes, Webb reeled him in and by the halfway point he was in the lead with Cianciarulo going over the bars in the whoops while trying to hold Musquin off for second.

Meanwhile it was all-out action behind him. Ken Roczen started outside the top ten with Tomac just inside the top ten but they eventually found themselves fourth and fifth after passing Malcolm Stewart and Dylan Ferrandis was forced into the pits with an issue while in that big-name battle.

Roczen stalked Tomac as Tomac stalked Barcia for third but no-one seemed to be able to make a move until Roczen pounced on Tomac when the defending champ missed a rhythm when passing a back marker. Roczen then went after Barcia but just couldn’t make the pass on the last lap and had to settle for fourth with Barcia rebounding in style from a practice crash to take third.

Eli Tomac wasn’t out of bother though, with Jason Anderson on the age from a bad start to catch and pass Tomac at the end to nick a top five and perhaps the first nail in the coffin for Tomac’s successful title defence, this time he started in front of Roczen and still finished behind him.

Webb said: “This ones huge, back to back wins is amazing. It was a great race battling with AC. Great points for the night. I felt like from start to finish I was in my comfort zone.”

Max Anstie won the Battle of Britain against Dean Wilson to take ninth in their heat and qualify direct into the 450 main event at his first attempt. Wilson would get through in the LCQ and finish 12th with Max Anstie 18th in the main.

The 250 West opener was carnage. An opening lap wrecking ball or, more accurately, wrecking Martin’s, with both Jeremy and Alex somehow being injured in separate incidents on the same lap in a terrible night for the family with the two riders capable of so much this season.

Jeremy, who had won his heat race, didn’t get the start and didn’t jump the first double but the guys behind him did and Martin got landed on and suffered a shoulder injury putting him out for the night. Then, almost unbelievably, further around the first lap Alex went down hard and the race had to be red flagged but Cameron McAdoo, for some unknown reason, knocked the medic and the already injured Martin back to the ground while navigating the turn despite the yellow flags as everyone else successfully avoided the crash site!

Justin Cooper was leading until the red flag but managed to holeshot the restart and run away with the win with Cameron McAdoo a strong second and Garrett Marchbanks putting his Club MX Yamaha in an impressive third after losing his PC Kawasaki ride. Hunter Lawrence rode well for fifth after a bad start in the restart having been running third until the red flag.

To make it three top riders injured, Jordon Smith crashed himself out of the restart early while battling for a podium.