Supercross results: Indianapolis 3 – Roczen makes it three in a row! 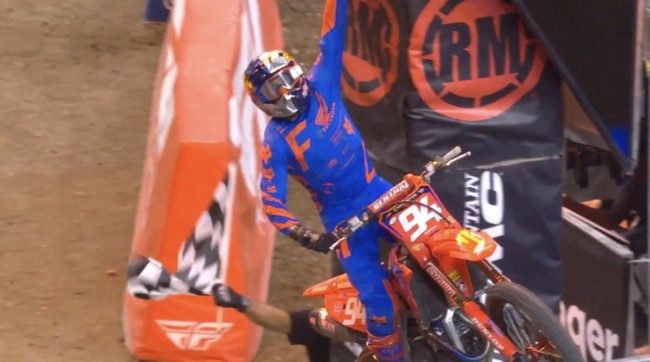 Ken Roczen made it three wins in a row with another brilliant display of calmness under pressure at Indianapolis. Roczen nabbed the holeshot after Barcia ran Tomac wide in turn one but he had all the heavy hitters right behind him!

Barcia even made contact with Roczen early after their lines came together in a corner but from there Roczen showed his composure to get into a rhythm and maintain roughly a two second lead – until Webb passed Barcia for second!

Webb then did his best to inch closer to Roczen but this time as the white flag came out and Webb made one last push onto Roczen’s rear wheel, the on-form German kept his cool and made no mistakes to a take another huge win and extend his lead in the championship to 16 points.

Roczen said: “This was amazing, I wasn’t gelling with the track very well so all the more reason to be super stoked with this win.”

Justin Barcia was holding Eli Tomac off for third until that man Vince Friese ruined Barcia and Tomac’s race by not getting out of the way and jumping into Barcia’s line who went down hard – leaving Tomac nowhere to go but into a sticker Barcia!

Tomac got sixth but a sore Barcia ended 19th a huge blow in the points and again Vince Friese with a lot of answer for making it two weeks in a row he has collided with the leaders when being lapped.

All the carnage meant Marvin Musquin took third, after a great ride through the top ten to get his season turned around after a tough few weeks.

Christian Craig got the bit of luck he needed to stay alive in the title fight to dominate the 250 main event while championship leader Colt Nichols went down spectacularly while leading and made life hard for himself!

Nichols got up and charged back to third from last after Jett Lawrence got held up by lapped riders with two laps to the go, giving Nichols what could be a huge two points in the title fight. Nichols now leads by just six points with two rounds left.

Jo Shimoda rode well for second and his best finish of the season despite a crash in the heat race while going for the lead.