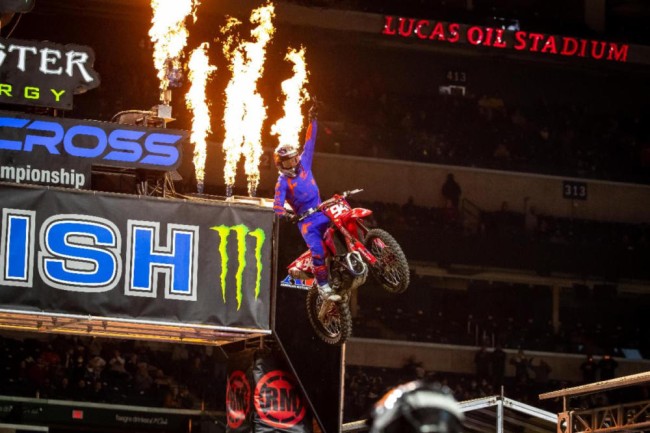 The final of three Monster Energy AMA Supercross, an FIM World Championship rounds in Indianapolis left the best for last in front of a maximum-allowed attendance of thrilled fans filling Lucas Oil Stadium with cheers in a pod-style seating format. Team Honda HRC’s Ken Roczen grabbed his third straight win in a nail biter as Red Bull KTM’s Cooper Webb pushed closer in the final laps but had to settle for second. Red Bull KTM’s Marvin Musquin grabbed the final spot on the podium with a hard charge and a little luck. The action was also wildly exciting in the Eastern Regional 250SX Class everywhere on the track except inside the helmet of Monster Energy Star Racing Yamaha’s Christian Craig; he made his second win of the season look effortless.

When the 450SX Class gate dropped Troy Lee Designs / Red Bull / GASGAS Factory Racing’s Justin Barcia came out with the holeshot but Roczen was into the lead almost instantly. Cooper Webb was in good position for the win with a third place start just ahead of Monster Energy Kawasaki’s Adam Cianciarulo. Less than three minutes into the race Barcia and Roczen came together hard when Barcia cut low on a 180 degree bowl turn just as Roczen cut aggressively down. Neither rider went down and Roczen remained up at the front.

Soon it was a race of four, with the top runners, Roczen, Barcia, Webb, and Monster Energy Kawasaki’s Eli Tomac separating from the pack and staying in a tight four-rider train. Roczen seemed to gain a little breathing room over Barcia until Barcia would pull back up, just as the same dynamic was happening with Barcia and Webb, and with Webb and Tomac. With just over five minutes left on the race clock in the 20-minute plus one lap race, Webb took advantage of a small mistake by Barcia and shouldered his way into second.

With less than a minute on the clock Barcia tangled with a lapped rider and went down hard in a transfer. Tomac jumped in, and without enough room to stop or swerve, hit Barcia’s bike and also went down. The mishap opened the door for Musquin to grab third.

But up front the fans saw Roczen’s nightmare coming to him again – Webb has stolen several wins from Roczen on the final lap and Webb was once again in position to steal the Honda rider’s chance, this time at an Indy hat-trick. On a night when Webb had posted the fastest lap time in qualifying, Roczen kept his composure, got through the lappers efficiently, and held on down the last corner to take his third win of the season, by only half a second, and stretch his points lead to 16 over Webb.

After four corners the Eastern Regional 250SX Class Main Event looked like it would be another win for Monster Energy Star Racing Yamaha’s Colt Nichols, who got into the lead after a second place start at the holeshot line. But Nichols crashed exiting a corner on that opening lap and flew from his bike, remounting in last place after dodging opening lap traffic. Christian Craig capitalized immediately, taking over the lead and never being challenged.

Just before the race clock ticked down to five minutes in the fifteen minute plus one lap race, Monster Energy Pro Circuit Kawasaki’s Jo Shimoda, moved past Muc-Off Honda’s Mitchell Oldenburg to take over second place; he would hold it until the end, making his career-best finish. But the drama was a little further back in the pack; Team Honda HRC’s Jett Lawrence was slowly recovering from a mid-pack start while well behind Nichols was frantically recovering from his crash. With eight minutes remaining on the clock, Nichols caught Lawrence, who sat in fifth. The two locked into a fierce but respectful battle as they crept forward, with Lawrence passing into third place with less than a minute on the clock. Right after clearing the white flag, Lawrence went off the track, dashing his hopes of a top three finish.

Monster Energy Supercross heads to Orlando for two rounds in the first open stadium racing of the year. The second Orlando round will also kick off the Western Regional 250SX Class racing. Tickets are on sale through the Arlington races with Atlanta pre-sale happening now in a limited capacity, pod-seating format. For ticket availability, the race schedule, and airtimes on Peacock and NBCSN please go to SupercrossLIVE.com.