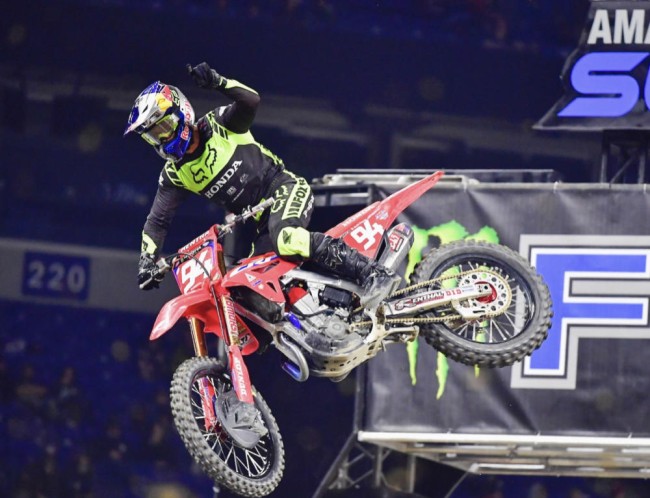 Ken Roczen made it four different winners in the opening four rounds in 2021 supercross and again it came down to the last lap – but this time the German held on!

It was a race of mistakes on the rutted Indianapolis track with Eli Tomac taking the holeshot from Cianciarulo and Roczen only for Tomac to slide out at the end of the whoops! Eli remounted in third just behind new race leader Cianciarulo and Roczen. As Roczen tried to find a way around Cianciarulo, Tomac got back onto Roczen’s wheel and the three pulled away from the rest of the field. At the halfway mark an under pressure Roczen made his move on Cianciarulo to take the lead but Tomac passed AC at the same time and suddenly the two big rivals were 1-2.

Cianciarulo tried to go with them but went down and then lost the battle with Cooper Webb for third, as Zach Osborne went from hitting the gate to take a great fifth. Dylan Ferrandis, who went off the track on a double that he struggled with all night while chasing Cianciarulo, recovered well to stay in the fight with Osborne, taking sixth.

Meanwhile up front, Roczen had pulled a three second lead until he made a mistake over the same double Ferrandis had and went off the track! Tomac got by but Roczen passed back immediately and held off the last lap charge of Tomac to finally take his first win of 2021!

Roczen said: “Adam was just holding me up a little bit I had to ride protective, I was a little stuck, I am so glad I made it happen, I jumped off the track and let Eli by, I felt it wa s the right thing to do and out the pass on right away again, I’m so happy to have the 2021 CRF450r on the top step.”

Colt Nicholls took the holeshot and ran away from teammate Christian Craig to take control of the 250 East championship as the drama went off behind him!

Jett Lawrence had a terrible start then ran into the back of another rider as he got into the top ten dropping back to 12th before putting in a fantastic charge through the field to get to third coming into the last lap with second place Christian Craig in his sights!

Lawrence had discovered a better rhythm that had him creep ahead of Craig but the American had the inside and went straight as they entered the next turn taking both riders to the hay bales with Craig going down and Lawrence caught in the middle of it allowing Mosiman and Shimoda by for their first podiums of year!

A devastated Lawrence took fourth with Craig fifth, knowing he blew a podium with a desperate move.

Lawrence said: “I had a really rough start, I clicked a false neutral. I put on a really good ride I saw that I could get Christian. I’m bummed, I put my heart into that race, it sucks it has to end like that.”

“I was just managing the race,” said Nicholls on his easy win. “I had an eye on everybody. It made my life easy getting off to a good start. I’m pretty happy,”