Stewart not happy with Musquin! 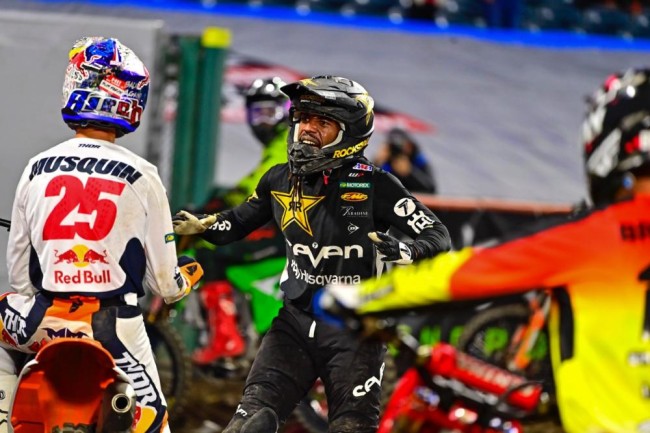 Malcolm Stewart was not happy with Marvin Musquin’s attempted pass that left both men on the deck! Stewart had been having a strong debut on the Rockstar Husqvarna under the guidance of Aldon Baker until the clash with Musquin, that left Stewart finishing seventh while Musquin got up to take fourth. Stewart then gave Musquin an earful of angry frustration immediately after the main, venting his fury the move that cost them both time and positions.

Musquin said he didn’t expect the move to leave both on the ground saying Stewart didn’t know he was coming: “I’m happy right now. It was a long and tough day, with quite a fight for the Main Event. I did my best with outside gate pick and I made some good passes, so I was pumped on the riding and the intensity early on. I made a couple mistakes and I lost contact with Cooper, and then Malcolm passed me. I tried to pass him to the inside but unfortunately, he railed the corner and we hit each other – he didn’t know I was coming – and we both went down. I got up and came back to fourth place, that was amazing. I’m pumped on the push and with the results, to be honest, with all the drama that happened during the main.”

See the clash below at 1 minute 30 seconds in:

Stewart didn’t really mention the class or his anger in his press release statement, saying: “I think this was actually one of the better season openers for me since I started in the 450 class. Going into the weekend, I wanted to execute a few things like having a good heat race, and I was able to do that. P1 for a qualifying, I’ve never done that before, so I feel like that was a big achievement for me and even though we went down in the Main Event, it was actually a good ride performance-wise but you know, the results weren’t there. It was a good start but I definitely feel there are a few things that we need to work on but overall, I’m happy to leave here on a good note and looking forward to Oakland and to keep driving – we’ve got 16 more races to go!” But as you can see below, the rage was evident immediately after the race. A penny for Roger DeCoster’s thoughts…

Jonathan McCready and Andy McKinstry break down a wild night at the 2022 AMA supercross season opener at Anaheim stadium! Get it on iTunes here or Spotify and YouTube below: