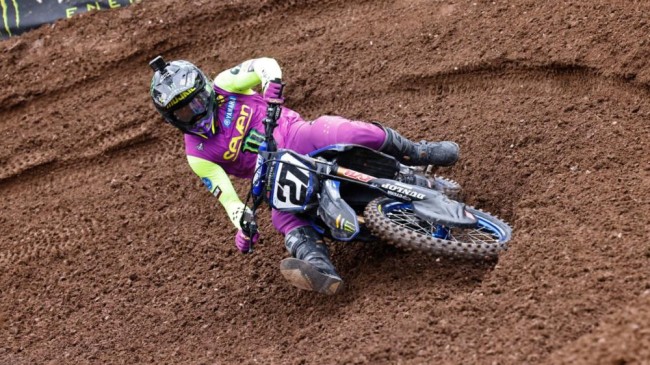 Monster Energy Star Yamaha Racing’s Malcolm Stewart rode a great race to earn a career-best finish in the 450 class, crossing the line third at last night’s penultimate round of the Monster Energy AMA Supercross Championship in Salt Lake City, Utah. Rookie Dylan Ferrandis once again fought his way back to a fourth-place finish, and Aaron Plessinger joined his teammates inside the top 10 with an eighth-place result.

Stewart got off to a good start at Rice-Eccles Stadium, qualifying fifth. The Florida rider showed speed in his heat race and finished a close second to the defending 450SX Champion. In the Main Event, he didn’t get the start he was looking for but quickly established himself in the top five. Stewart was then locked in a battle for third and kept pushing, showing strength in the whoops and staying right on the heels of the competition. After the halfway mark, he made the pass for fourth and then advanced to third the following lap after the race leader went down. From there, Stewart brought it home to earn his first podium in the premier class.

Ferrandis struggled to find his comfort zone, but he and the team kept working all day and got it dialed in for the main. Coming off a fourth-place finish in his heat race, the Frenchman got a good start inside the top five but was pushed off track by another rider and shuffled back to seventh. As time wound down, Ferrandis advanced to sixth and then charged his way to fourth with four laps remaining to earn his third top-five result in his debut season.

Plessinger also struggled to find his comfort zone in the challenging conditions. He got a good start in his heat race but ultimately finished fourth. The 2018 250SX West Champion didn’t get off the gate as he hoped in the Main Event and was 10th after the start. He quickly worked his way to eighth behind Ferrandis and tried to push his way forward but made a few mistakes and had to settle for that position.

Jeremy Coker: “It was an awesome night! The day didn’t start out that well, and we had to work really hard as a team to make the improvements that we needed to turn things around. I’m really proud of our guys. We pulled through once again as a team and got some good starts. Malcolm rode a flawless race, and Dylan came through the pack and had another awesome ride. Unfortunately, Aaron made some mistakes that hurt his results, but all in all, it was a good night. We come back here next weekend and will work to get our guys back on the box at the finale.”

Malcolm Stewart: “It was a great day! I felt good and rode well all day and just let the race come to me. I didn’t have the best start in the Main Event, but we made it work the first couple of laps. Then Coop (Cooper Webb), (Jason) Anderson, and I had a pretty gnarly battle. I was really strong in the whoops tonight, and even the corner after the mechanics’ area, and kept gaining ground.

“I’m just so stoked to finally get on the box. It’s been hanging over my head for a long time, and we finally got it. We finally did it! It’s a dream come true. It’s one of those moments I’ll never forget. Everybody says that after your first one, it comes easy, so this is one of many. I’m looking to have some more fun next weekend and go out here for a repeat.”

Dylan Ferrandis: “It was a tough day. We made some changes this week to improve the bike, and it didn’t really work in the first practice, so we had to keep working on more changes, which made it hard to get comfortable. In the heat, we went the wrong way, but we made another big change and the bike was really awesome in the main. I had a good start, then Anderson pushed me off the track, and I lost a couple of positions. It took me a few laps to learn the bike and to feel comfortable on it because it was a new setting that I had never tried before. Then when I felt comfortable, I pushed and gave everything that I had. I made some good passes on some strong riders and I came back to fourth. It’s a good result overall, and we look to come back next weekend and do better at the finale.”

Aaron Plessinger: “The day started out a little slow, I wasn’t really gelling with the bike in practice. That was kind of how it went all day long; I was just struggling with the bike setup and trying to get going. I had a good heat race going but about ripped my shroud off and then couldn’t really turn right that well and finished fourth. In the main, I didn’t get a good start and was battling mid-pack. I made my way up to the back of Dylan, but I just couldn’t get around him. Then I made a few bonehead mistakes and finished eighth.

“The track was tough tonight. There was a bunch of crashes. Eli (Tomac) passed me and then jumped right into some hay bales right. A bunch of people went down tonight, so I’m glad to stay up, stay healthy and be back for next Saturday. We’re going to go back to California this week and try to get the bike a little bit better and finish out the season strong.”