Stewart, Ferrandis and Plessinger on Arlington 3 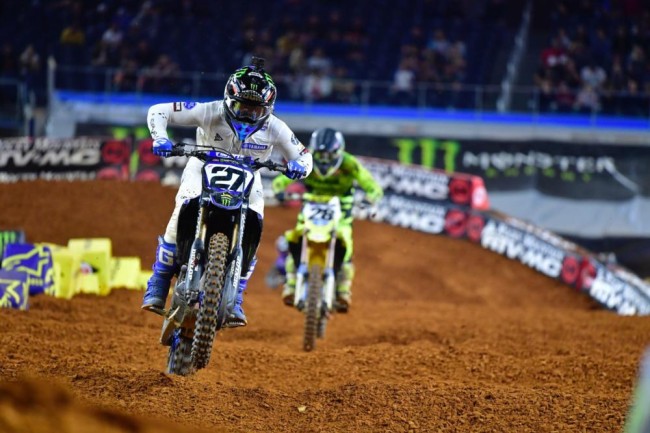 Monster Energy Star Yamaha Racing’s Malcolm Stewart rebounded from a tough couple of rounds at the AT&T Stadium to finish sixth Saturday night at Round 12 of the Monster Energy AMA Supercross 450SX Championship. Rookie Dylan Ferrandis also improved his result in Arlington, Texas, fighting his way to seventh. Their teammate Aaron Plessinger joined them in the top 10, crossing the line in ninth.

After a couple of crashes at the first two rounds of the Arlington tripleheader, Stewart was looking for some redemption before the series went on break. He had a good qualifying in sixth and got off to a good start in his heat, finishing third. The Florida rider found himself inside the top 10 after the gate drop in the Main Event and worked his way up to sixth, where he ultimately finished.

Ferrandis was also looking to get back on track after his crash last Saturday. He and the team made some improvements, but the Frenchman was still not feeling 100% in the demanding track conditions. Ferrandis finished sixth in his heat and was 12th after the start of the Main Event. Undeterred, the two-time 250SX West Champion kept pushing, passing his teammate Plessinger on Lap 10, and then advanced to seventh as time started to run out.

Plessinger was looking to build on his back-to-back heat race wins in Texas, but unfortunately, he struggled to find his comfort zone for most of the day. He finished fourth in his heat race and was just outside of the top 10 in the main, in front of Ferrandis. Plessinger made his way to eighth but started to have some arm pump issues and ultimately had to settle for ninth after being passed by his teammate. The Ohio rider sits fifth in the standings, four points ahead of Stewart, with Ferrandis in eighth.

The Monster Energy Star Yamaha Racing 450 team gets a three-week break before heading to Georgia to kick off another Monster Energy AMA Supercross tripleheader at Atlanta Motor Speedway on Saturday, April 10.

Jeremy Coker: “It was a good day overall. We made a lot of improvements on the motorcycle. Over the past two days, we kept trying a few things to help Aaron go better, but I think we should have just left it. For the Main Event, we went back to his Daytona setup, and he was much happier. So I think we’ve got him where he needs to be, and we’ll just leave it alone and let him race. We made improvements on our starts throughout the day, which we’ve been working on. The Main Event didn’t show it, but our heat race starts were better. We’re making the improvements everywhere we need to. We just have to put our head down and keep working.”

Malcolm Stewart: “We rode well all day. We didn’t get the best start in the Main Event, but we made it work and made a few passes during the first couple of laps. The track was pretty intense just because of all these big jumps. It’s been a while since we’ve had some big jumps, so it’s always fun to bring that back. Even though there wasn’t that much sand, it was actually really tough. I will say, Arlington kicked my butt. Man, the first two rounds were pretty rough. Usually, I go really well at this track, but I was hitting the ground left and right. I’m happy that we rebounded with a sixth-place finish and left here on a better note than what we started with. I’m looking forward to this three-week break, and hopefully, we will start riding a little bit of outdoors. Before you know it, we’ll be right back at it and getting ready for Atlanta.”

Aaron Plessinger: “I kind of struggled all day from the first practice on. We had an issue, and I didn’t really get to do the free practice. Then I went back out and tried to learn the track quickly, but I wasn’t really gelling with the bike that well. Even in the heat races, it was just a tick off. In the main, I got it to where I liked it, but I was too aggressive and gave myself arm pump about halfway through and it kind of deteriorated after that. The track broke down a lot. The whoops got really slick, the sand was gnarly, and there were a lot of ruts jumping in there. If you didn’t gel with this track, it beat you up, so it was definitely a tough one. I’m going to go back and do my homework and come out swinging for Atlanta. We have another three races in a NASCAR stadium, so I’m ready for it!”