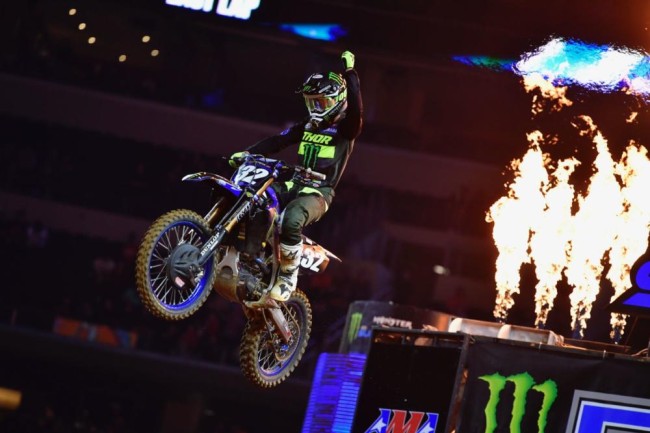 Justin Cooper put on a masterclass performance at last night’s final round of the Monster Energy AMA Supercross tripleheader in Arlington, Texas, to take the win and reclaim the points lead in the 250SX West Championship. Nate Thrasher crossed the line ninth, with Jarrett Frye finishing in succession to join his teammates inside the top 10.

Cooper went into Arlington 3 looking to end the week on a high note. He got off to a great start, maintaining his perfect qualifying record by leading every practice session before the evening program. The New Yorker backed that up with two great starts, first in his heat race which he won in dominant fashion, and then in the race the counted, where he also led start-to-finish to earn his second win of the season. As the series heads into a three-week break, Cooper reclaims the red plate with a two-point lead in the 250SX West Championship.

Both of the team’s rookies continued to make improvements at Round 5 of the championship. Thrasher had a big crash in the first qualifying session and hit his jaw pretty hard. He sat out of the second session to seek medical evaluation at a local hospital and make sure he was okay to race. With the decision made that he was ready to return, Thrasher came back to finish fourth in his heat race. In the Main Event, he got a decent start inside the top 10 and worked his up to seventh, ultimately finishing ninth on the demanding track to end the week in Arlington with three top-10 finishes.

After a few tough rounds for Frye, the 20-year-old rebounded to have his best performance thus far in his debut season. He started off with his best qualifying result in 10th and then grabbed the holeshot in his heat race, led the first lap, and went on to score his best heat race result in second. Although he did not repeat that flying start in the Main Event, sitting just outside the top 10, Frye kept pushing and battled throughout the race to improve to a 10th-place result.

The Monster Energy Star Yamaha Racing 250SX West team gets a three-week break before heading to Georgia on April 10 to kick off another Monster Energy AMA Supercross tripleheader at Atlanta Motor Speedway.

Wil Hahn: “We needed that. I think Justin is probably relieved right now and obviously very happy. We’ve just got to keep the momentum going. I think that’s the hardest thing right now. It seems like everyone is having a tough time getting the momentum going in this series (250SX West Championship), so going into a three-week break with tonight’s results, it couldn’t be much better than that.

“Also, what a night for both of our rookies. Nate had a pretty tough day, missing the second practice and not being sure if he was going to race. So to come out and fight like that showed a lot of heart. Jarrett made a lot of progress after some tough races here in Texas. He was pretty bummed out after last Tuesday, but he came back and really applied himself tonight. I can see him growing and getting better and better.”

Justin Cooper: It was a great night. It kind of gave me flashbacks to round one in Orlando. I was first in every practice, won the heat race, and won the main. It was nice to get two holeshots tonight. We’ve been working to get back to that. It’s been a tough road this season with being on the ground and working my way from last in the main. I’ve had to fight for every position, so this was the kind of race I’ve been looking for. You can take it for granted when it comes so easy. I definitely showed myself what can happen at these last couple of races, so it was really good to have some clean air again, and it was nice to click off laps like I was at the practice track. I had a good flow and was just managing the gap the whole race. It feels good to be back on top and to leave with the red plate. I’m looking forward to the Atlanta rounds.”

Nate Thrasher: “It was a good night at Arlington 3 after a tough start to the day. In the first timed qualifying, I had a pretty big crash and hit my jaw pretty good. I thought I broke it. I finished up the session and just pushed through it to end up with seventh. I missed the second qualifying and went to go get an x-ray at the hospital. We got back here probably 30 minutes before I had to go out. So we got dressed, got ready, took a little medicine, and then we went out and rode the best we could. Ninth was the best we had tonight, but we had the speed to be up there in the top five for sure. We have got to keep pushing and keep getting a little bit better on the weekend. We’ve got a three-week break, so the plan is to just get healthy and come back in Atlanta.”

Jarrett Frye: “Arlington 3 was a better day for me. I qualified 10th and pulled the holeshot in the heat race. It was pretty cool to lead a lap and then finish second after some tough races. In the main, I didn’t get the start I needed. On the second lap, I had a big moment and almost went down, so I just tried to finish the best I could. I ended up 10th, which is not what I’m looking for, but it was a better day, so we’re going to go back to work and get ready for Atlanta.”