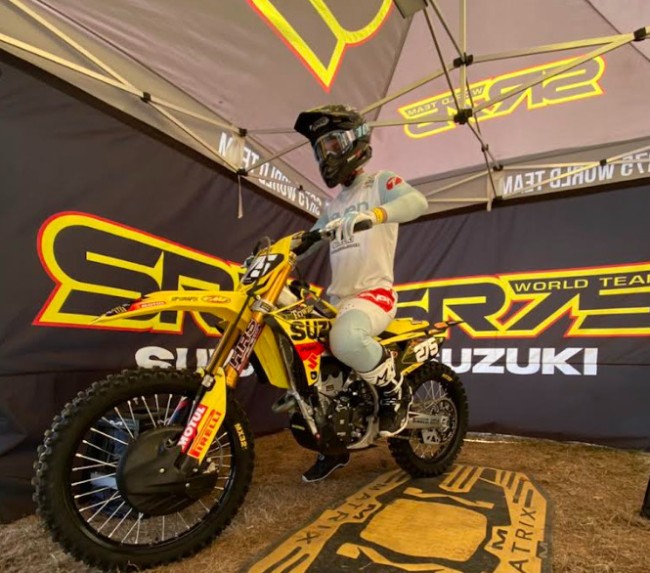 SR75 SUZUKI are pleased to announce the invitation from the FIM World Supercross Championship and the ACU for a wildcard ride with Dylan Woodcock in the SX2 class at the WSX British Grand Prix, October 8 at Principality Stadium in Cardiff.

It is the first ever event in the new-from-2022 FIM World Supercross Championship.

This is a fantastic opportunity to go into battle with some of the best 250 Supercross racers on the planet in an insanely competitive field of champions.

As always, the SR75 SUZUKI crew appreciate this opportunity and can look forward to racing at the highest level in front of what will be an incredible atmosphere with the home fans – who always step up for the British racers.

The WSX British Grand Prix gets underway at 5pm on Saturday October 8.

“I am buzzing to get to Cardiff with my team and race with the best guys. I live for this and we have been working hard as a team to be ready for every opportunity to race at the highest level. I cannot wait to feel the atmosphere and experience everything with the home fans at the first ever WSX Grand Prix in history.

“Thanks as always to the World Supercross Championship, the fans, Suzuki GB and my Team. Let’s GO!!!!”

“It is an honour to receive this invitation from the WSX organisation and the ACU. We are all excited to get to Cardiff and race with this new and exciting global phenomenon.

“Everything we do is supported by a core of great individuals and companies to complement the fans who make the sport of Supercross what it is – the most exciting evening entertainment on two wheels on earth.

“In the relatively short time we have been working with Dylan, everything has been great as we make progress every week and the young man’s fantastic attitude and personality is starting to shine through. Supercross is the toughest battle and that is the challenge we work for.

“Thanks to Suzuki GB, you, the fans of Supercross and everyone involved in the SR75 organisation. We cannot wait to see you all in Cardiff.”