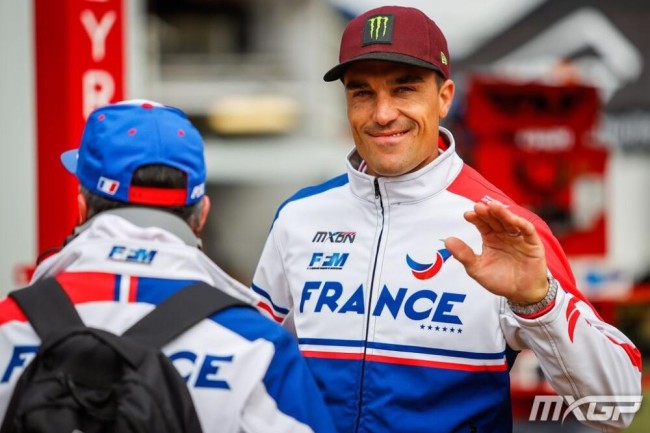 One rider that knows exactly what it takes to win the MXoN is Gautier Paulin as he’s led the team as team captain of winning the event multiple times. Paulin is one of the most success riders at the MXoN of all time and even though he’s not a professional rider anymore he is still involved in the French team.

The French MXoN team manager, Pascal Finot has decided to tap into the experience Paulin has and drafted him in to help the team.

After the MXoN at RedBud, the French riders were asked about Paulin’s involvement in the team and what it is like having him in the French camp.

“I mean sometimes you have a trainer that never rode the track or never rode the level we are at. When a guy like Gautier tells us that we should maybe do that or says he used to do that, then for sure you cannot say no. You trust that guy because he has been through what we did today with all of this emotion. Also, the conditions, the mud, the dry and everything. His career speaks for itself and I think having this guy with us helped our confidence. With how he is on the track he is like a trainer for us at the MXoN and trying to help the best he can. I mean I think it was good to have him here today”, Dylan Ferrandis stated.

“Nothing much to add, actually. Gautier is a very experienced rider so it’s a plus and another eye because he rode the track and knows how it feels to be out there on that track. It’s just a plus for us and it is amazing to have him so thanks to him and thanks for all the advice he give me. It was a great confidence boost he give me all weekend long and that confidence I had going into moto two is also partly because of him so thanks a lot”, Maxime Renaux stated.

“Well, I mean they said it all (laughs). They said so much about Gautier so yeah, Gautier, thank you for coming! I really felt like he was really part of us and I thought at one point he was going to put the helmet on and go racing.  I mean every time I did the MXoN he was racing so thanks for being here and thanks for all the help. We also have a great team behind us with the whole French federation, we have a lot of eyes on the track and they report things back to us. There’s a lot of work behind it so thanks to them and I think next year will be another good year”, Marvin Musquin stated.

It’s certainly a good move by the French to keep Paulin involved in the team and it’ll be interesting to see if Italy and Belgium keep the likes of Antonio Cairoli and Jeremy Van Horebeek involved who have also had a lot of success at the but RedBud marked their last professional races as Motocross athletes.