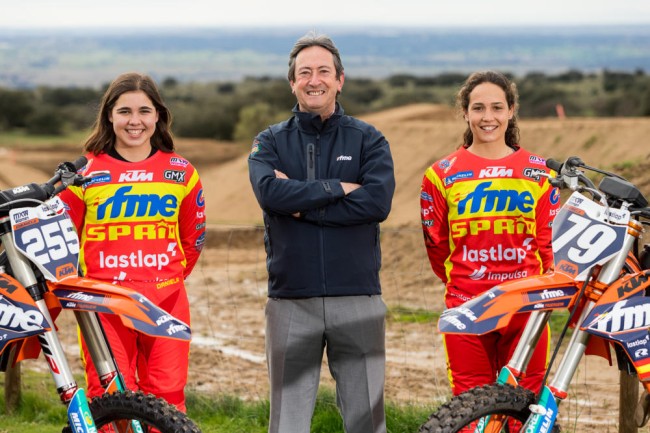 To date, there has never been a women’s motorcycling team that has raced in a complete world championship.  The initiative of the Spanish Motorcycle Federation -RFME- whose objective is to promote the women’s team, has made it possible;  Daniela Guillén -Lloret de Mar, February 3rd, 2006- and Gabriela Seisdedos -Madrid, August 8th, 1994- are the two riders who will represent Spain in the FIM Women’s Motocross World Championship that begins in the Czech Republic on July 24th .

Motocross is one of the motorsports where equality is beginning to be a reality.  In the World Championship events, women race on the same tracks as men and during the same weekend with live television.

Daniela Guillén and Gabriela Seisdedos belong to two very different generations, united by the same passion: motocross.  They have had very different careers, but they both reach this point by being two highly competitive athletes.

Seisdedos is eight times Spanish national champion.  Although she has raced the world championship before, this will be the first time she will do so in such a professional team that will give her the necessary support to be fully focused on the races.  As for Daniela, this will be her first participation in the  Woman’s World Championship, since she has always competed against men in national championships.

“I’m nervous and really looking forward to starting the World Championship.  We are a new team and although we have already done races in the Spanish Championship, we still have to get comfortable and gather experience with the team;  I think it’s normal to be nervous, I am really excited.  We have made a great team and I think we will all do well.  I want to get started to see if all the work we are doing pays off”, explains Gabriela Seisdedos.

“I really want to go to the World Championship, it is my dream.  I am excited because I know that I will be the youngest rider on the grid, but I don’t know what my level will be since I have never raced in the women’s category in Europe.  Now I continue to train hard to be ready for Loket and try to be as far ahead as possible ”, said Daniela Guillén.

The motorcycles of “Las Leonas”

Both Daniela and Gabriela will compete aboard  KTM’s 2022 250SX-F . Gabriela changed bikes at the beginning of the season and her participation in the National championship has allowed  her to adapt to the new bike.  For Daniela, the change has been quite a challenge this season: she went from a KTM 85SX to the big bike (KTM 250SX-F), a great leap for her, who has more than proven to have adapted during the Spanish championship competing against the best Spanish MX2 riders.

The team is supported by Lastlap, the company in charge of organizing the Spanish Motocross Grand Prix that will take place in Arroyomolinos on October 16th and 17th.  The strong and innovative commitment to the creation of this project, whose purpose is to remain in time, is a step forward to promote the female category.