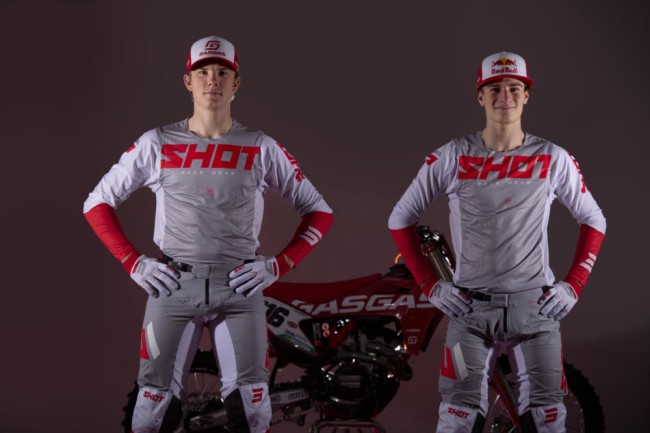 In only their third fulltime GP season and their inaugural year representing GASGAS team manager Justin Amian added more milestones to the squad’s growing legacy. GP rookie Längenfelder hit the ground running on the MC250 and recorded his first world championship top-5 moto, an overall top-10 and a well-deserved podium in the Czech championship round of Dalečín.

While Simon’s season was cut short due to injury super fill-in Isak Gifting kept the DIGA Procross GASGAS outfit firmly in the limelight in the second half of the MX2 world championship. The multiple Swedish champ transferred from EMX250 to the GP scene with with seemingly effortless ease. Isak rode to several top-5 overalls and placed second in the final moto of Lommel III.

Isak Gifting: “Personally I’m looking for three things in racewear: it must be light, thin and flexible. As soon as you put on the Shot Aerolite pants you feel that it stretches nice and tight, exactly how I want it. There’s nothing to hold you back so that you feel really free to go for it! I’m super stoked be part of the Shot family.”

Simon Längenfelder: “It’s cool to start the season with a new look and I really like the style of Shot Race Gear! But I also like racewear that helps you to get the job done. The Shot Aerolite shirts are very breathable which makes a big difference when it’s hot. I also like it when you have the best possible feeling with the bike: thin layers and lightweight materials that allow you to concentrate on riding.”

Ghislain Huot, CEO Shot Race Gear: “We’re very excited that Shot is joining DIGA Procross GASGAS Factory Racing in the MX2 world championship. Between our shared passion for motocross, performance and strong family roots there’s a lot we have in common. From their riding and enthusiasm you just feel how much racing means to Isak, Simon and the whole team! It’s fantastic to be a part of this journey with such a talented and professional group of people.”

Justin Amian, team manager DIGA Procross GASGAS Factory Racing MX2: “Since day one we’ve always worked hard to improve and to reach a new level each season. To go after it side by side with partners who share this vision is the best motivation for everyone on the team! We’re proud to represent a brand that’s as well-recognized and successful as Shot Race Gear. When we will line up for the first GP in Oss we will be confident to go racing with the best performing and best looking setup.”