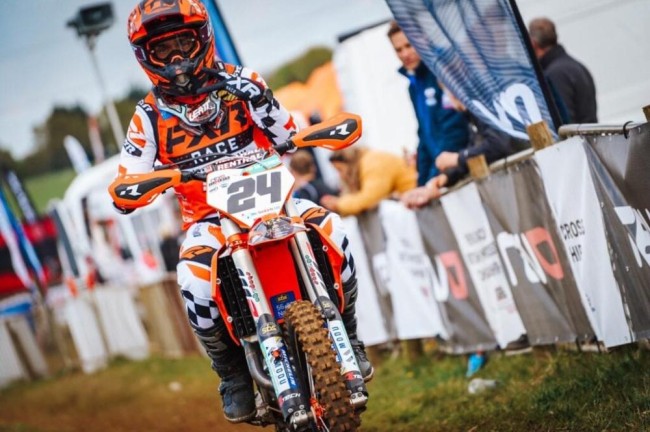 On the eve of what’s bound to be a wild season-opening weekend in Belfast’s SSE Arena, the 2023 Arenacross Tour heads straight to Aberdeen in Scotland where the brand-new 15,000-seat P&J Live Arena will host rounds three and four of the championship over the weekend of the 28th and 29th of January.

Aberdeen is Scotland’s third largest city and is famous for many things, it’s known throughout the world as the Granite City because so many of the local buildings are built out of the locally-quarried stone blocks, it’s also home to Scotland’s oldest bridge, a massive amount of whiskey distilleries and many of the world’s finest golf courses. And did you also know that Aberdeen is also considered to be the luckiest place in the UK to buy a lottery ticket with over 40 millionaires coming from the area? Perhaps you should make a purchase while you’re in the area for the Arenacross.

One man who’ll be desperate for a little of that luck to come his way will be the one rider that’s carrying the hopes of a whole nation on his shoulders as the only Scot in the Arenacross Pro class line-up – Gabriel KTM’s Shaun Simpson.

The 34-year-old from Fife has had a stunning career in the sport, winning world championship races around the globe as well as several national titles (and not just in the UK). However, throughout it all, he’s rarely had the opportunity to race in events as prestigious as Arenacross on home soil in Scotland – a handful of times at best – and so this will be a great opportunity both for him and his many followers.

“In my whole career there have been very few opportunities to race in Scotland at events of this level,” confirms Shaun. “So, racing in Aberdeen will be really cool. Aberdeen is only an hour and a bit up the road for me and is where a few of my personal sponsors and some family friends are from. I think there will be a great atmosphere.”

Of course, Simpson is signed up for more than just his local round and will be one of 24 professional British riders looking to win this year’s championship – the first to be recognised by the ACU as an official British Championship.

“It’s really cool that the ACU has seen how important Arenacross is to the sport and given it recognition as an official British Championship. The series promoter has gone all out to attract the top British riders and there’s good prize money at each round. Having two rounds in Aberdeen is a bonus and I definitely didn’t want to pass that opportunity up so I committed to the whole championship.”

Although Simpson is a three-time British champion and winner of four Grands Prix in the premier MXGP class, he has limited indoor experience and other than a few one-off indoor appearances where he’s acquitted himself well has to go back a few years since he raced a full indoor championship but nevertheless is excited to get going.

“To be honest I am really looking forward to it,” he admits. “It’s not something I’ve done for a wee while, but it is something I have done in the past. Okay, it’s only been one-off events here and there and I’ve not done a full indoor series since I was on a 125cc two-stroke in the early noughties, but it will be a great experience to give it a go, see how it is and relive my youth a little bit.”

A believer of the five Ps strategy – Plan, Ploy, Pattern, Position and Perspective or Preparation Prevents P*ss Poor Performance if you prefer – Shaun already has his game plan figured out.

“The formula for success is to stay safe in practice and set a good time, get a good gate pick for the heats, get a good start in them and stay out of trouble and then do the same again in the Main Event.”

It sounds easy when you put it like that, but Shaun is fully aware of just how intense the competition will be once the gate drops. “I know it will be tight and that any one of five or six guys will have a shot of winning on any individual night which will keep it interesting for the riders and very exciting for the fans.”

Does Simpson put himself on that list of potential winners? He sure does…

“I’d definitely like to think that I could win at least one or two races and if not then I’d like to be on the podiums at the very least,” he admits. “If I can do that and stay consistent, then I think taking the title is very possible.”

Tickets are still available for both rounds of the Scottish leg of the Arenacross Tour presented by Fix Auto UK. Visit www.arenacrossuk.com and follow the BUY TICKETS link.