Sexton – thought it was the last lap! 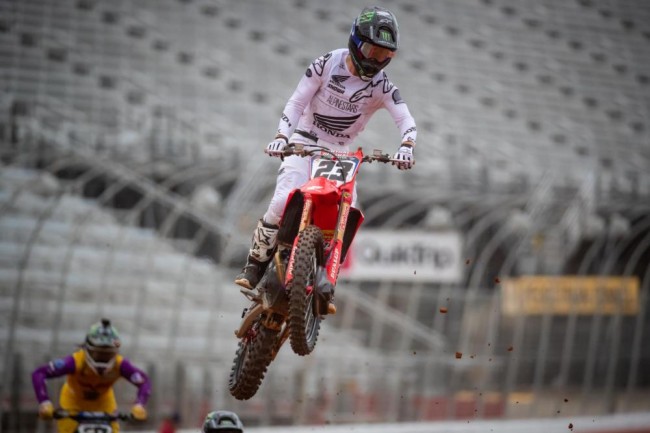 Chase Sexton revealed in the press conference that he though the race was over, explaining why he didn’t jump the second double that gave Tomac the gap to win the race after the backmarker cost Chase the lead. Sexton though was very calm when he spoke to the media after the race despite missing out on his first 450 supercross win.

Unfortunately for you, you had a great race going for 90 percent of it. Take me through coming to the white flag when you tangled up with [Cade] Clason, and then you couldn’t jump a jump even after that. So just tell me how that all broke down.
It was a really good race for me. Everything was going well. Obviously, Aaron [Plessinger] went down, so that was unfortunate for him, but it ended up giving me the lead. From there, I kind of just kept putting in my laps. I really felt like I was putting in solid laps. I couldn’t tell if it was Eli [Tomac] or Jason Anderson because they were both wearing kind of the same gear. So, it ended up being Eli, obviously. I knew he was coming. I saw him out of the corner of my eye kind of in some corners. I was really struggling in that first set of whoops, which was costing me time. I feel like I was good on the back half of the track and Eli would catch me in the front. So, I was riding a really good race and felt like I was doing consistent laps, but Eli pretty much just dropped hammer with probably four or three laps to go. Pretty much sucked up right to my rear wheel. I feel like I had energy left. I feel like I was riding really well again.

Cade, I just went inside trying to just get around him really quick. I knew Eli was right there. So, in that next corner it was pretty vulnerable to stop before that double and block pass. So, I wanted to get through those two corners really quick. Honestly, the one after that, my mechanic Jade put on the pit board “two laps to go,” and I was like, “Okay.” I thought I saw the white flag. I thought the race was over, and I saw Eli keep going. I was like, “The race isn’t over.” So, I rolled the next jump, and then obviously the race was over after that. It was just not the best ending, but first 450 podium which was a positive. After the year I’ve had, it’s nice to be on one of these calls [press conferences] again and back on the podium. It was a really good night for me. The track kind of suited me. Obviously, it was tough, but looking forward to Tuesday and trying to keep this train going.

Take me through your learning curve of not only riding the 450 in supercross but racing the 450 in supercross, which can be a completely different than racing in the 250SX class.
From my past few races, it’s been pretty tough. Just been on the ground quite a bit. Not usually one to crash that much. I guess it just goes to show how tough it is to race or to be at this level. The tracks are probably the most surprising how gnarly they get. That’s where Cooper and Eli and a lot of those guys are just really good at adapting to the rougher track. I haven’t quite yet figured it out. But it’s been a really fun time, even though I have hit the ground quite a bit. Just happy to keep learning every race. I think if I can take something out of each round, I think we’re going in the right direction. So, for me, just being able to be healthy and still racing right now, it’s a positive. Just trying to learn as much as I possibly can from the more experienced riders in this class.

You show a lot of speed, but then also have a tendency to hit the ground every once in a while. Is there anything specifically about the 450 that you’re just struggling with a little bit here and there, as far as where to put the machine?
Yeah. I would say my speed hasn’t been an issue. Obviously, I’ve qualified really good and had some good heat races. For me, I think the 450, you have to pay attention I would say a lot more than the 250, just having that much more power, especially obviously the sand sections. They kind of got the best of me this year. Where you don’t have as much traction, there’s a lot more power to the rear wheel and that’s where I tend to be a little lazy and that’s where I’ve obviously had a little bit of a problem. So, for me, just trying to be a hundred percent focused for that 20 minutes and not take any breaks has been the most important part for me trying to learn this 450. Again, the tracks get really gnarly. So, the 250SX class compared to the 450 race, it’s like a completely different track. So, for me, I’m still learning that. Eli is the man when it comes to finding those lines late in the race, as of right now. So, I just want to learn. It’s fun to race with these guys.