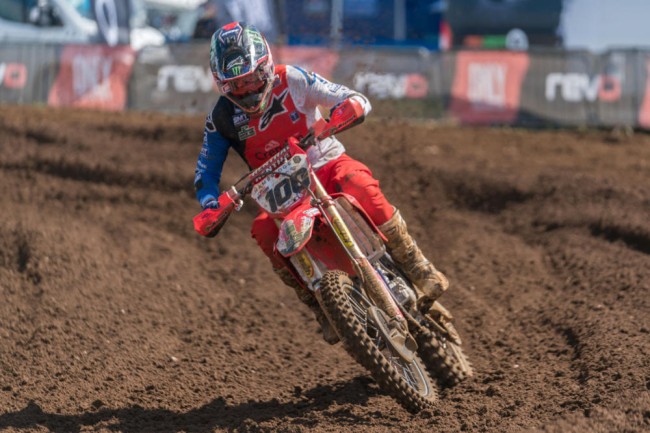 The first official race outing for the Crendon Fastrack Honda team ended with a thrilling podium place for British champion Tommy Searle, who came within a few bike lengths of winning the final race in the opening ACU British Motocross championship at Culham in Oxfordshire.

And in the MX2 class, rookie Jay Hague showed he has incredible speed as he consistently ran in the top three in both races, although crashes in both motos unfortunately saw him drop down the leaderboard.

With MX1 rider Jake Nicholls following last-minute doctor’s orders to stay off the bike following injuries to his hand and shoulder due to a crash in training, it was left to 31-year-old Searle to uphold the team’s honour in the MX1 class.

Looking smooth and confident on the all-new 2021 Honda CRF450R, he set the fastest time in qualifying around the tough, hillside circuit on the banks of the river Thames. Although he didn’t quite snatch the holeshot in the opening moto, Searle came around the first lap in fourth place and set his sights on the men in front. He battled past Shaun Simpson but couldn’t quite reel in Evgeny Bobryshev and Dylan Walsh so took third.

Second time out Searle was quickly in third place, and battled hard with Walsh over runner-up spot. The pair fought long and hard, with Searle eventually making the pass and setting off in pursuit of leader Bobryshev. Searle caught up to the Russian on the final lap and came tantalisingly close to stealing the win but it wasn’t to be and he just missed out. But second place gave him second overall on the day.

Tommy Searle said: “I feel good and happy with the day. It’s a naughty track – very tricky – but I really enjoyed it. Coming into today I would have been happy with third and second places. I could have done with better starts. But I felt good in both races.

“After finishing third in the first race I was feeling good for race two but when I was in third place I needed to get around Dylan Walsh faster than I did. I had him covered but he’s riding clever and I couldn’t get him. I finally passed him and put in some hot laps after that. I may have been able to put a push on Bobryshev but he was flawless all day. I’m really happy with the bike, and I feel good and I know what we need to do for the next round.”

In the MX2 class, team rookie Jay Hague was struggling with a chest infection that he feared might make him miss the event. But he battled on and in qualifying had a great ride, mixing it with many of the GP regulars to take fourth.

He made a great start in the opening race and was in third place until it was red-flagged to due a crash. The re-start saw the 23-year-old CRF250R rider get caught in the pack but he worked hard, coming through the field until he slipped off. He got back on and battled to finish ninth.

The second race saw Hague get another great start and he held a strong second place. But it was not to be as he crashed heavily down on of the track’s rutted hills and he was lucky to escape serious injury. He tried hard to continue but didn’t score points, leaving him 14th for the day.

Jay Hague said: “I’m feeling a bit sore after my crash but overall I’m happy with my speed both in qualifying and the races. I was sitting third in the first race which was red-flagged. In the restart I got a bad start and came through the field but dropped, and came back to ninth. In race two I was in second but had a tumble down the hill. It was one of those days where luck’s not on your side.

“But I’m definitely pleased with my speed. I wish I could have stayed on two wheels. Working with Dave Thorpe and the Crendon Fastrack Honda team has been a breath of fresh air for me, with riding advice and the amazing bike. And now I know I have the speed to run with the top guys.”

Team manager, triple world 500 champion Dave Thorpe, said: “After a whole year with no British championship, it feels so good to be back racing even though there were no spectators allowed at this first event. It was a great start to the season for Tommy, and I’m really happy with Jay’s pace and also his attitude. It was a difficult day for him as he had a chest infection, but he showed real determination and I know he’s going to have a great season.

“And of course the whole Crendon Fastrack Honda team were outstanding. With great work from the technical team of Ryan, Willy, Rob and Sam, I can’t thank them enough for their effort and professionalism. Roll on the next round at Lyng!”