Searle and Thorpe on another MX1 British title 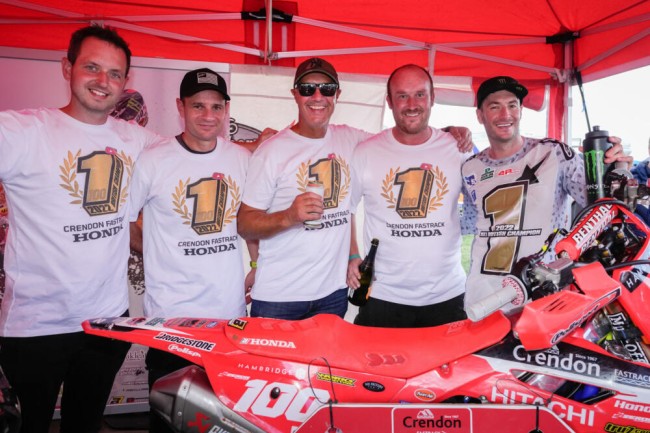 Tommy Searle clinched the ACU British motocross championship with yet another podium finish in the series finale at Landrake in Cornwall, marking back-to-back MX1 titles for the Crendon Fastrack Honda team.

The 33-year-old took the holeshot in both motos and led on the opening laps, but wisely avoided risking the title by going all-out for race wins. He followed title rival Harri Kullas home for second place in the opener, then circulated in a safe fourth place in the second heat to make sure the title was his.

It was a stunning end to the season which has seen Searle lead from the opening round where he took a double win at Culham in March. He held the leader’s red plate since then. He finished on the podium at every single round, took at least one holeshot per event and won eight motos this year, with two perfect double wins. He didn’t crash in any British championship race and his Crendon Fastrack Honda had no breakdowns or problems at all. His worst race finish in the series was fourth, showing how consistently fast he has been.

The title marks back-to-back British championship wins for Searle and Crendon Fastrack Honda in what is his last race for the team in the UK. Searle’s first season with the team was in 2020, but the series didn’t run due to the pandemic. The only national championship to run that year was the MX Nationals and Searle won that title – his first on Honda.

Searle said: “We got the job done again! I’m so happy I won the championship which is obviously the most important thing. I felt good all day, was fastest in qualifying and went second then fourth in the races – just making sure I did what I had to do.

“The bike and team have been great all year. Dave, Ryan and Willie and everyone have been brilliant – it’s been a real pleasure. I never crashed or had a bike problem all year. So that’s three championships in three years on the Honda so I can’t complain.”

Team manager, triple world 500 champion Dave Thorpe, said: “Tommy deserved to win it. He’s ridden extremely well this year in the British championship which is what he totally focused on. He delivered in every round. He did enough today to win – but I must admit I was a bit nervous at times!

“I’m also so pleased for Honda as the CRF450R never missed a beat. That’s to do with a great bike and a fantastic team with Willie, Ryan and Rob. We’re all really chuffed to win it for the team, of course for Tommy but also for our sponsors and partners who make it all possible.”

Searle has a final race on the Crendon Fastrack Honda in the Motocross of Nations at Red Bud in the USA on September 24-25 where he has been selected for Team GB.