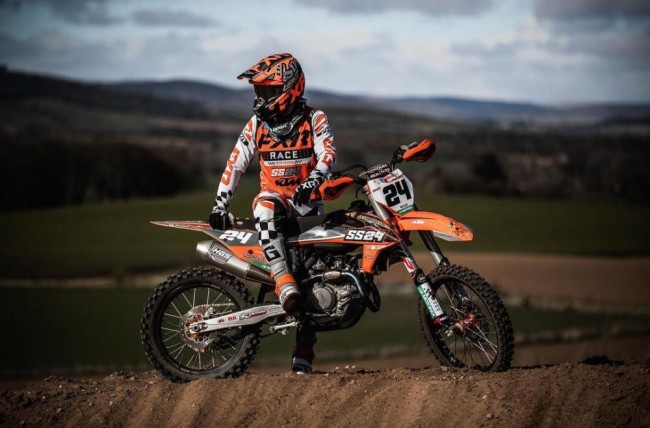 After a great start to the 2020 season running his own team, disaster struck for Shaun Simpson with injuries ruling him out for the rest of the season. But now fully healed up and with extra testing time in the bank, a rejuvenated Shaun is feeling great ahead of a long-awaited return to race action this weekend at round one of what will be a hotly contested British championship.

We caught up with the down-to-earth Scot to discuss the long off-season, the one day World championship format and the upcoming British championship season.

How has the off-season been for you and with the uncertainty of Covid and how much you should train in say, January- has that all been difficult to manage with the training intensity? Obviously you have been trying to get a team together as well!

On the team side of things I have been very lucky I have been able to roll a lot of stuff into this year. I have quite a lot of sponsors pretty much committed again for this year although some of them are a bit skeptical when we were going to get riding and how business was going to be so, I think I am going to have to wait until I get racing for a few to come back on-board and just wait a little bit as we go along which sounds a bit dodgy but at the same time people want to see results on the board they want to see how I’m performing before they possible commit. Because let’s not forget, I am coming off a season where no-one did a great load of racing but I also broke my back as well so it’s quite a major injury to come back from, so I think people are waiting to see how I’m getting on before they fully commit.

With regard to training and intensity it has been quite hard. I think everyone went about their sort of went about their normal duties in December and were really hopeful for the season to kick off at a normal point, Hawkstone Park and the international races in France, they were all scheduled in as usual, the closer we were getting to those the more it was looking unlikely. Training started taking a less intense type feel, we were just sort of making sure we were ticking over with a lot of base work and stuff we had done. Then there was quite a big hole in the season prep when we got issued the new calendar so it’s been a bit of yo-yo effect with training, pushing quite hard, then taking a week easy, then pushing hard and taking a week easy. In that sense I don’t think we will be anywhere close to burn-out too soon.

It’s obviously one of those where you are going to have to manage the situation but now that we have got the British championship coming up and a good few races before the world championship, there’s a good area to test ourselves physically and machinery-wise before the GPs start. I’m really looking forward to getting stuck into these first few British championships, unfortunately it’s sounding like first one will be without any crowd so that will be slightly disappointing with regards to atmosphere and things like that but it will be just good to get back behind the start line.

How are you feeling on the bike? You mentioned you had a big injury, was that difficult to come back from or are you feeling pretty strong and back to where you where pre-injuries when you were strong in the Grand Prix races?

My family are 100% behind me, my parents are heavily involved in the team, my wife and my children – it’s what we do, it’s what we’ve always done. I feel like I have still got a good bit left in me and I’m really excited to get back.

I feel my set-up, we have had so much time to hone it and really improve it. Whereas coming out of the 2019 season after a podium at the MXoN in Assen, it was quite a rush job to put everything together for 2020 so I didn’t feel then half as organised as I do now. I had time to really go through every aspect of the bike, we really feel like we have got things working well; chassis, engine, handling, power delivery even down to testing new tyres, suspension settings that we just didn’t have time to do last year. We have got a set-up now that I am really, really comfortable with and just hoping that when the races start and the gates drop that it feels as good in the races as it has done in practice. It’s one of those old things you never really know how you are doing until the racing starts, I’m just looking forward to getting back to it.

As you say you haven’t raced for the guts of a year now, Tommy Searle rode a British Masters last weekend, what are your expectations coming into round one and do you think it will be hard to get that race intensity after being off so long?

I don’t feel like it will, I have had plenty of prep with regards to endurance and intensity. I’m prepared for 30 minutes plus 2 laps at world championship level so I don’t feel the 25 plus 2 laps, I’ll have any stress at the British championship. Obviously there will be a few cobwebs to blow out and as everyone knows Tommy had a bit of a crash last weekend and he has probably he will feel a bit more comfortable this weekend because he has got that out of the way.

It takes a few races before you start feeling more comfortable, there is going to be a lot of guys in the same boat but I am just going to have to call on my experience in this instance and use what I know from previous years and come into it, not get too excited and make sure we get solid points on the board. I would be very disappointed if I wasn’t up at the sharp end fighting for wins and overall podiums. The ultimate goal is to win a championship this year so we will be going out there with that mindset and if things don’t go my way on the day then we will be looking toward the bigger picture. It’s eight rounds to perform well at and we need to make sure we get things kicked off solidly at round one, but the goal is to win.

The level of the British championship is pretty high again this year, so with a few rounds of that before the Grand Prix races kick-off, will that hold you in good sted coming into the first couple of GPs? And it’s a one-day format in the world championship as well..

Yeah, it will be very similar. It will be interesting to see how the world championship goes with the one day format and it sounds like it’s going to be Sunday’s only. I think that could be long weeks and short bursts at the end. It definitely keeps the intensity up on Sunday’s anyway with qualifying in the morning and two races in the afternoon.

I think the British championship level is good this year. We have a good choice of tracks, it’s nice to have a few rounds just before the world championship like I say just to get the cobwebs blown out and hopefully we are flying on all cylinders before the first round of the GPs kick off. But there is still some uncertainty with that with regard to Foxhill being changed to the same date as Russia and those kind of things are still just a little bit up in the air. I think, like everyone, I am just taking it a week as it comes at the moment, it’s going to be hard to plan too far in advance, so just focus on this weekend, come home get washed up and see what’s next on the calendar and work towards that.

With the length of the world championship are you trying to manage your energy and not peak too early, say May/June and keep that back to August or whenever?

I think it’s just not planning too far ahead. Just race on the weekend and put everything into it. I do believe with the one day format and a full week to recover, the GP’s will be quite a bit easier this year. Even though it’s a world championship we will be doing 50% actual riding at race pace on weekends. If we train efficiently during the week we should always be at that top fitness at the weekend, I honestly think that everyone has had a lot of time off, everyone is fully repaired and ready for it, all the energy banks are totally filled up so I think this year you will see a lot of guys holding peak fitness for a lot longer.