Savatgy: Ready to fight for a top five 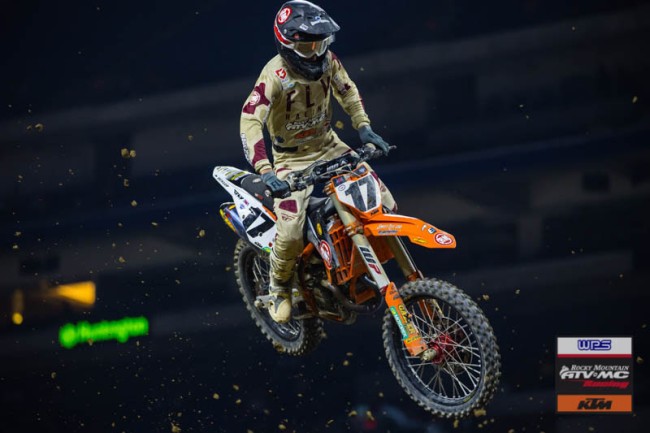 The first of Indianapolis’ three races this season went off this past Saturday night. As the snow fell outside the stadium, team rider Joey Savatgy put on the heat and propelled his KTM 450SX-F Factory race bike to a top-10 finish.

Joey Savatgy powered out of the gate in his heat race and quickly entered a battled for position within the top 5. The Engine Ice supported rider didn’t let the fervor phase him, even thwarting off a last-lap pass attempt from an out-of-control Justin Barcia to take the checkered flag in 5th place. In the main event, Joey used the exceptional traction from his Dunlop tires to power down the start straight and round the first turn almost with the holeshot. He found himself in a battle and defending his top-5 position for over ¾ of the race, ending the night in 8th place.

Savatgy: “Overall I am happy with how I rode tonight. My starts were there, and I had the pace to run inside the top five. Tonight, was a confidence boost and a big leap in the right direction. We will make a few adjustments to the bike and be ready to fight for a top five Tuesday night.”

After going down in his heat race, Justin Bogle made his way to the main event through the LCQ, where he overcame a mid-pack start and sliced his way into a transfer spot, crossing the finish line in 3rd. In the main, Justin got pushed wide at the first turn and started at the back of the field. He moved up positions and crossed the finish in 16th place.

Both the riders will prepare for round 5 of the 2021 Monster Energy Supercross Series, the second of three races in Indianapolis this coming Tuesday night.