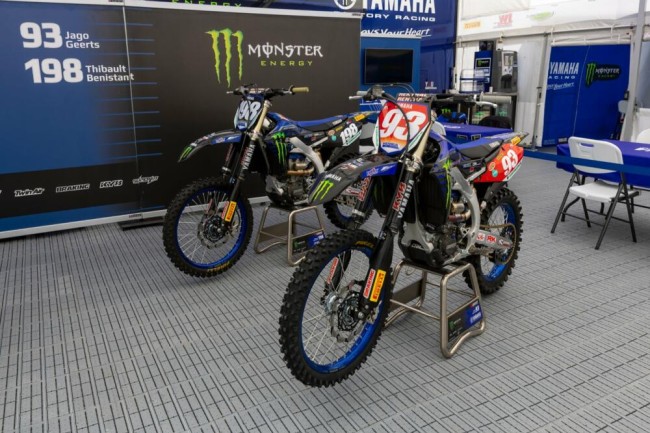 Factory Yamaha are chasing a second MX2 World Championship title in a row. After Maxime Renaux won the title last year Jago Geerts has a chance of winning the championship this year but it’ll go down to the wire as he only has two points over Tom Vialle heading into the final round.

Earlier in the season, Geerts was linked with KTM but the young Belgian is believed to have decided to stay with Yamaha (his contract is also expected to include a year in MXGP) and KTM have already confirmed their MX2 rider line up for next year in the form of Liam Everts and Andrea Adamo.

Thibault Benistant who has had some very impressive rides this year will also be under the awning and for 2023 he’ll be the underdog. This year he has proved he can win moto’s so next year he’ll try and find the consistency to become a championship contender.

It’s thought that the Factory Yamaha MX2 team will have three riders for the 2023 season and have rewarded EMX250 champion, Rick Elzinga with a factory contract for the year ahead in what is a very strong rider line up.

It will be Elzinga’s rookie season in the MX2 World Championship but he did race some wildcard rounds this year and ran in the top ten. With having the factory team behind him for the 2023 season and two perfect teammates to learn from he’ll hope to run at the front.

At the start of the year Andrea Bonacorsi was linked with the factory team for the 2023 season but they’ve decided to reward the EMX250 champion instead so it’ll be interesting to see what the future holds for the young Italian. He could opt to stay in the EMX250 series for another year or perhaps change brands to make the step up to contest the MX2 World Championship.

For the MX2 final round heading to Turkey, Yamaha are expected to send both Elzinga and Bonacorsi to race the final round of the World Championship along with Geerts and Benistant.