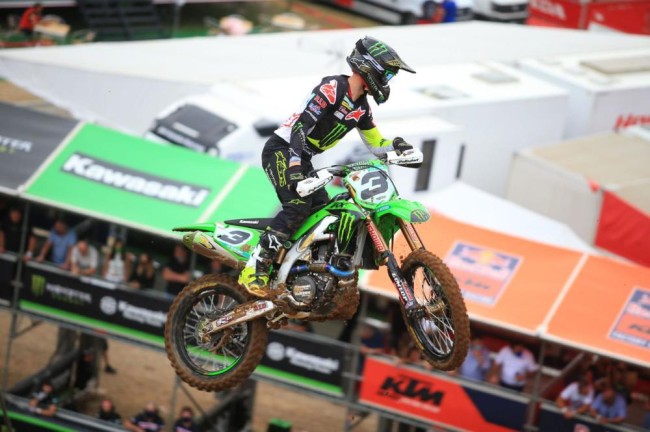 Romain Febvre and the Monster Energy Kawasaki Racing Team resume their challenge for the FIM MXGP Motocross World title on Sardinia this weekend heading into nine GPs in the space of nine weeks.

The Frenchman has enjoyed the most successful start to the GP series since his title-winning 2015 campaign to be runner-up in the points standings at the halfway stage of the series.

“The first part of the season was pretty good, but I was still making too many little mistakes at nearly every round. Despite those mistakes I am in a good position in the championship, but it would be even better if I hadn’t lost points due to those small crashes. My goal is to make less mistakes during the second half of the season, even if I know my rivals also had similar troubles; that’s why the positions are so close,” he explained. “The level in MXGP is so high now and that could explain why we are all making mistakes, but I think that sometimes I simply lost concentration as I haven’t always been pushing really hard when I have crashed. The speed is there and my starts are consistently good so I’m confident for the rest of the season.”

In recent years the start has become so important that all of the factories have been working hard to develop the best technology for their riders in this respect and the Kawasaki KX450-SR is now the benchmark in MXGP as Romain has claimed no less than five holeshot awards so far this season.

“It’s great to have so many holeshots; we have worked so hard for this. The team work on the bike, I work on my technique and, together with my teammate Ivo, we have proved how competitive the Kawasaki is. I’m really happy with the bike; the entire team worked hard together this winter and we never stop testing new parts. And when the results are good it’s even more motivation for everyone; we have a good dynamic and we want to continue like this.”

After securing his future with Kawasaki for two more seasons, Romain is now fully focused on training and racing.

“The KX450-SR, as I have always said it, suits me perfectly. I love to ride it so for me the choice was simple and clear. Other teams contacted me, which is normal, but my number one choice was to stay with Kawasaki and KHI in Japan has been very open to our requests so that this happened quickly. At the moment we are all fully concentrated on this season where there is so much to play for with the title. It was in the best interests of all of us to come to an understanding during the summer break so that we could focus on our goal.”

And of course this goal is to perform to the maximum in each of the upcoming rounds, the next of which is at Riola Sardo on Sardinia this weekend.

“A few days ago we received the updated calendar and I’m happy with it. We will again have several double – or triple – headers; for me it’s nice to have so many GPs in rapid succession as I don’t like it so much when we have a long break between races. It’s very tight in the standings and we know that anything can happen. I feel good both physically and on the bike, and everyone in the team is highly motivated. This year we can fight for the title and I will do everything to win it … for myself, for the team and for Kawasaki!”