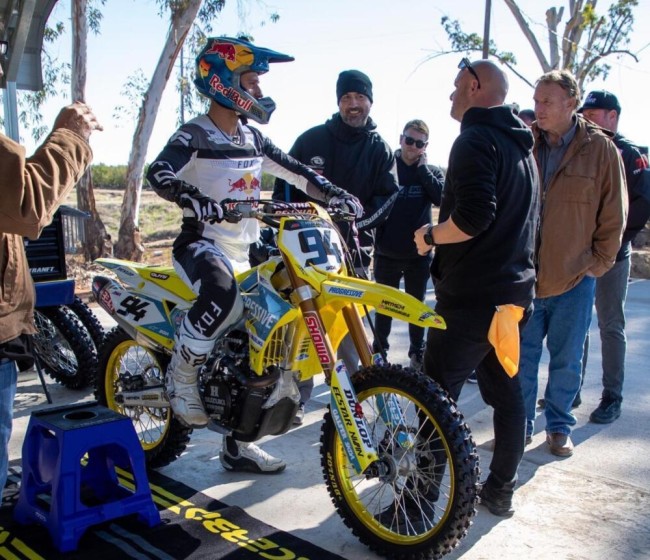 Ken Roczen spoke to Steve Matthes and Micheal Lindsay on the Pulp MX show about his switch to Suzuki, and the German says he loves the bike and believes he can win races on the yellow machine!

Roczen also talked about riding the Stark Varg and the drug test drama at WSX that he took that he says was blown out of proportion. Roczen also confirmed that he has the option to race outdoors or WSX after the AMA indoor season.

“It did something for me,” said Roczen on riding the Suzuki for the first time. “I have been on that bike a lot, although it is a lot different than 2016 but my goal… I had been with Honda for so many years. I loved the whole team (Firepower Honda team he raced Paris and WSX). I loved working with them and they did a really good job with the bike but ultimately, I’m like, man, I’m in this position and my biggest goal was to expand my horizons and try something different and spark it up in my career.

“I was pretty sold (on staying with his private Honda team), but at the same time I wanted to give this a legit shot, I didn’t want go up there and make pre decisions on how it was going to be, I just wanted to go up there and ride it. I rode it for a couple of days, and I ended up going with those guys (HEP), and I am really stoked that I did. I enjoyed it, I was going for something new and I just had a good feeling about it. It felt familiar, I really like the size of the bike – it felt bigger to me than the Honda. I’m excited to tinker with it a little bit more, but for the base they gave me I was really impressed with it.”

Listen to the whole interview from 32 minutes in with Roczen going deep on what it’s like to ride the Suzuki, showing just how much feel for a bike he has, plus what it’s like riding the Stark Varg and the drug testing drama: