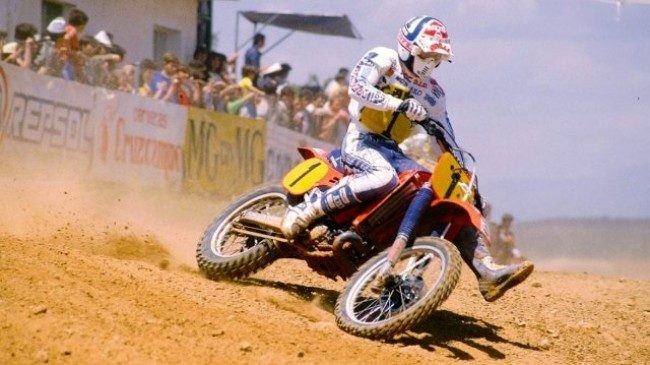 Triple world champion and 80s mx legend, André Malherbe, has sadly passed away at the age of 66. Malherbe will forever be associated with the heyday of HRC-Honda in the 1980s. Style and charisma abounded for the fast Belgian, André also had fans from all over the world.

Malherbe was not only fast and stylish on the track. As one of the first European riders, he paid attention to his image. In 1980, for example, he caused a revolution by entering the race in snow-white racing clothes. Something that was absolutely not done at the time. Many other groundbreaking outfits would follow. Only bad luck and injury kept Malherbe’s record from growing any larger.

After Honda did not renew his contract for 1987, “Hollywood” said goodbye to the World Motocross Championship. After one successful season in motor racing in which he took the French F3000 title, he began a new challenge. As a rookie, he headed to the Dakar with the professional Sonauto Yamaha team. In that mythical desert race, however, disaster struck early in 1988. Malherbe crashes and becomes severely paralyzed. He is barely 31 at the time.

From then on, André Malherbe had feeling only in his head and neck. His life was really hanging by a thread. The rehabilitation was extremely difficult because the ex-top athlete had to learn to live a different life. Friends such as Jean-Claude Laquaye (pictured above) and daughter Cassandra continue to support him unconditionally. Although pain and hardship become a part of his daily life, the sprightly Malherbe continues to struggle.

André rarely, if ever, complained, and with time comes renewed contact with his beloved sport. Friends or journalists like Gerald Wéry (RTBF) already invited him to a GP. Gentleman Malherbe was always affable and was pleased to see how, with Clément Desalle, a strong young Walloon finally emerged in the World Motocross Championship. André Malherbe, born on March 21, 1956, died on Thursday, November 24, 2022.

See Malherbe in action below: