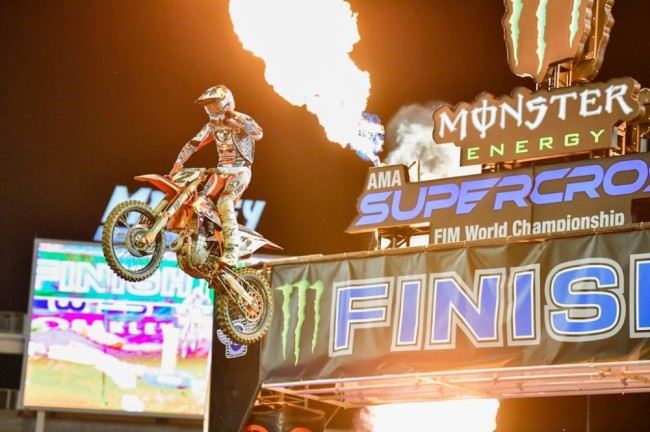 Cooper Webb used his will and skill to break the three-race win streak of Ken Roczen and passed the championship leader to do it in Orlando!

In what was a six point swing in the championship, Webb passed Roczen and early race leader Brayton, with brilliant move in the same turn to take the lead with Roczen immediately then getting himself into second place. From there the chase was on with Roczen keeping the pressure there as Webb tried to inch away, ultimately Roczen just couldn’t quite get close enough to make a pass in a huge straight-up win for Webb.

Zach Osborne took his first podium of the year in third with Rockstar Energy Husqvarna man taking the holeshot only to get shuffled back to fourth quickly in an intense opening few laps. Osborne however, stayed with Webb, Roczen and Barcia and, when Barcia nearly went down in the whoops he got back into third and held off the determined Gas Gas rider to take the last spot on the podium!

Webb, who is now 13 points behind Roczen, said: “This one was a great race, I had some good speed -I hadn’t led in while and made some mistakes We needed to stop that momentum Ken had. It feels good to win again.”

It was a bad night for Eli Tomac who got a bad start and could only climb to fifth with the front four long gone, Tomac now sits 29 points back of Roczen.

And it was even worse for Dylan Ferrandis who crashed out of the race early while seventh in a tough night for the rookie after a run of top ten performances.

Jett Lawrence took a holeshot to checkered flag win for his second supercross win of the season, holding of championship leader Colt Nichols to do it! “It’s awesome,” said Lawrence. “My mum was able to come out. That ride, I finally got my start sorted and it was just a good ride.”

Christian Craig, after a big crash in the heat race, went through the LCQ and got a good start from the outside but couldn’t do anything about the front two in front of him and had to settle for third, and is now eight points behind Nichols in the championship heading into Salt Lake City.