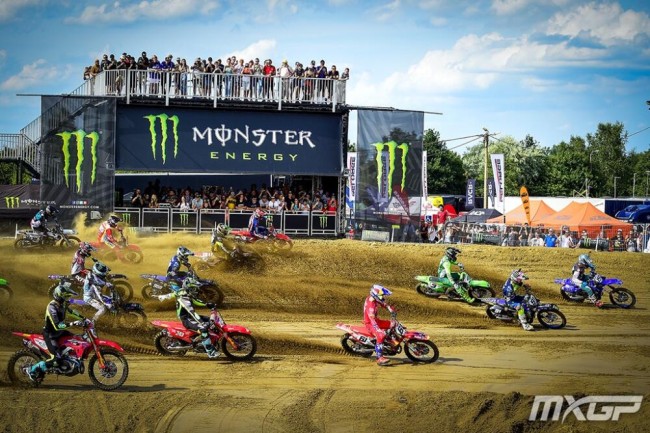 Brian Bogers took a simply fantastic opening moto win in the heat and bumps of Lommel with Calvin Vlaanderen working his way into second passing Romain Febvre late on.

The top four in the championship didn’t have the results they wanted with maybe the exception fo Renaux. Prado led early and looked great before completly losing his rhythm when Bogers passed and dropping all the way to ninth. He looked exhausted and very disappointed after the moto.

Tim Gajser struggled to get his normal flow and spent his time battlign Yamaha’s most of the moto eventually coming seventh with Seewer who made a mistake, just in front in sixth and Renaux who came from around ninth to fifth just behind teammate Coldenhoff.

Race two and it was the same top four but in a different order as Glenn Coldenhoff controlled the race from the front and Brian Bogers took the overall win off Calvin Vlaandern with two laops to go with a late race pass on a tiring Romain Febvre for third! Vlaanderen went second but just missed the top step by a point as three Dutch riders go 1-2-3 in the sand and Herlings wasn’t even racing! The hard part will be choosing which one to leave out for Red Bud!

Jeremy Seewer made two passes late on to get Gajser and then Renaux for fifth with Gajser seventh and Prado again taking the holeshot but this time finishinf tenth but a crash also didn’t help his cause when he was still top five.

The track was simply brutal between the bumps and the 30 degree heat and even the top three looked shattered at the end with every rider covering themselves with water thanks to the shower heads erected for them immediately as they come off track. That was a gruelling Grand Prix!