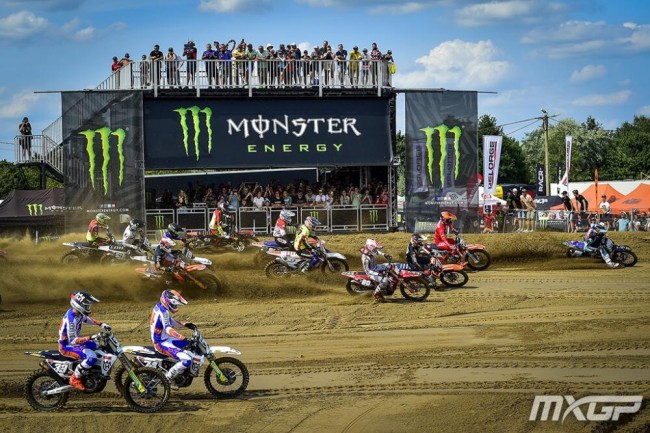 Kay de Wolf and Jago Geerts dwelled for the win once they got past the fast starting early race leader Roan van de Moosdijk. De Wolf continually put the pressure on and eventually made the pass to take a brilliant win.

Liam Everts worked his way into third with a two for one pass on Langenfelder and Benistant before passing van de Moosdijk before going down in the bumps. Liam remounted to tale fifth.

Tom Vialle had a disaster. He gate in the top ten despite outside gate pick but crashed on lap one the again with two to go just as he thought he had a chance at getting van de Moosdijk, ultimately finishing seventh.

Moto two and it was Geerts v de Wolf once again battling for the win with Geerts leading early before de Wolf took the lead. This time Geerts had something more to give, and after following for a while, made his move and checked out for the race win and overall victory at home!

Simon Langenfelder briefly got into second until the heat got him and two crashes in the last couple of laps dropped him to ninth and off the podium.

And it was Tom Vialle who made it onto the podium despite a very tough day but a hard fought fourth in race two meant some damage limitation but he is now 23 points behind Geerts in the title chase.

Liam Everts crashed early but made his way back to seventh on a day of what could have been – a podium was only two points away.