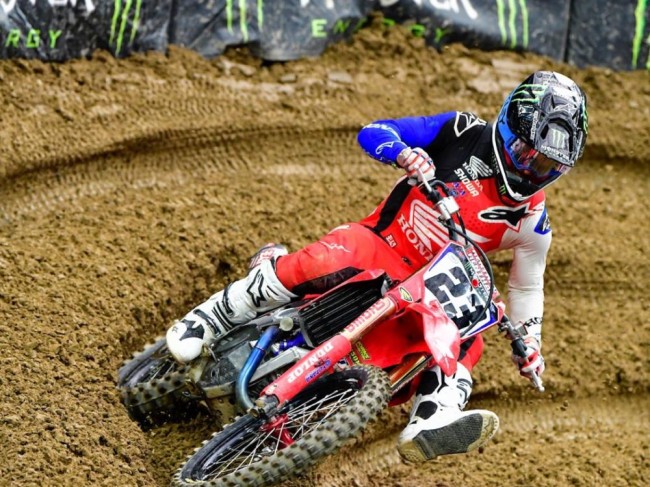 Rookie Chase Sexton was the fastest qualifier in his first ever 450 race in what was a stunning debut! The HRC Honda man beat Tomac by just 3 hundredths of a second in a class that sees the competition very closely packed on times. Despite the rutted conditions Sexton unsurprisingly says he is feeling confident and good on the bike as he looks for a dream start to his 450 career tonight. Ken Roczen, after being fastest in session one, took fourth overall just two tenths behind teammate Sexton but also looked great in what was a great start for the new 450 Honda in supercross.

Marvin Musquin looked very comfortable in both sessions to go third and whipped it over the finish in celebration at the confirmation of his speed after a year off but in contrast teammate Cooper Webb was back down in 13th overall!

“I feel awesome out there,” said fastest 250 East qualifier, Christian Craig, and he looked awesome on the Star Racing Yamaha. Veteran Craig and Jett Lawrence laid down the speed on lap one of the second qualifier with Craig in the wheel tracks of Jett until the Aussie made a mistake. Craig barely made any while posting the fastest lap of the day but we have seen this blistering speed before in practice – can he do it in tonight’s race?

See the quad Forkner did in session one – that Craig and Lawrence started doing in session two!