Results and report: Anderson wins in Foxborough with Lawrence champ in the 250 East 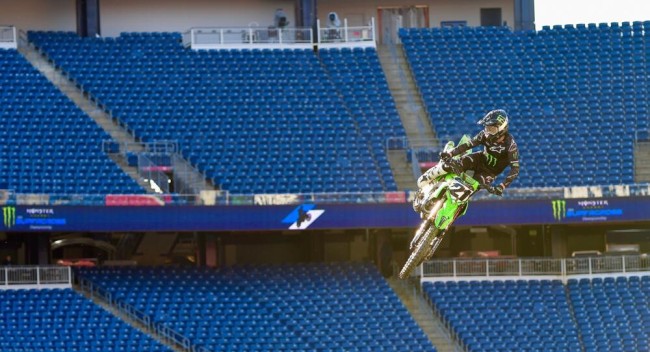 Cooper Webb took the holeshot in the 450 main event at Foxborough from Tomac, Anderson and Sexton with the race well and truly on with the all the big hitters up front. But then Tomac got held up and stalled trying to pass Webb allowing Anderson and Sexton by and it meant Anderson now had the chance to take the title to the final two rounds.

Anderson was feeling the flow and made the move on Webb for the lead with Sexton then Musquin passing Webb before Tomac made the move on the 2021 champ. But just when Tomac set his sights on the front three, Malcolm Stewart came alive and passed Tomac to take fourth with the champ now starting to look at the big picture.

Anderson to the lead! 🟢

With Anderson out front and Tomac back in fifth, the title looked to be on hold for a week as Sexton and Anderson went to battle for the win. Sexton got close but Andersons did enough to keep Sexton at bay to take the main event win and solidify second in the points whilst keeping his slim title hopes mathematically alive. But the Kawasaki rider has to be regretting those run of take-outs and crashes mid-season that cost him a stronger shot at this title.

Eli Tomac took no further risks and slipped back to sixth with Barcia getting passed and then he was demoted to seventh by Webb who made the move on the last lap as the Star Yamaha rider eyed winning the title next weekend on home soil in Colorado.

Lawrence chased Forkner through the field as Pierce Brown led from RJ Hampshire but with five minutes to go they collided in mid-air with Hampshire going down.

Brown led until two laps to go when Forkner and then Lawrence passed thr KTM rider and, despite a pass attempt that Forkner countered while they chased down Brown, Jett couldn’t quite get close enough on the final lap to pass Forkner who took a well deserved win after a tough season.

But it was Lawrence who took the title adding the supercross crown to his 2021 outdoor title and confirm he is the next big thing in the States.