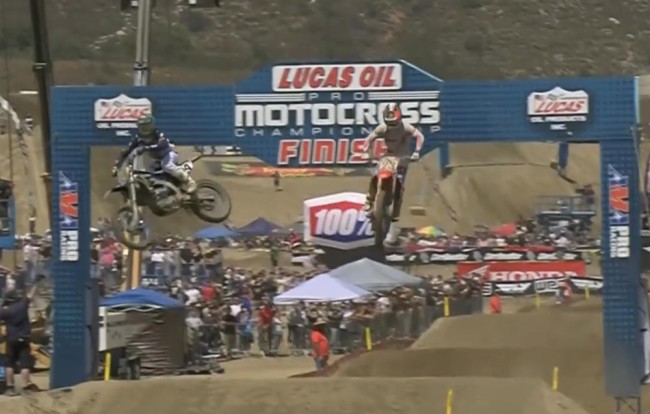 Jett Lawrence took the first overall win of the US outdoor season with a great ride from the middle of the pack to second in race one behind Jeremy Martin before passing both Martin and race leader Justin Cooper to take the second moto win with an assured authority that belies his age. Jeremy Martin went 2-1 for second and a strong day with Cooper third overall.

A special mention too for Max Vohland who led race one for 20 minutes and was running third with a couple of minutes to go when his Red Bull KTM expired causing a very unfortunate DNF. Vohland gated third in race two from the outside gate pick and was battling RJ Hampshire for a top five when they collided and both went down but Vohland re-grouped to take seventh to show his first moto speed was no fluke!

A happy but surprised Dylan Ferrandis took the overall at Pala win in his rookie 450 motocross appearance! The Star Yamaha racing rider held off a late race charge from Chase Sexton to win race one after Adam Cianciarulo threw the lead away with a heavy crash. Race two saw Ferrandis not get the start he wanted and the Frenchman had to work his way into third to secure the overall with Aaron Plessinger and Ken Roczen long gone out front!

Roczen took sixth in race one but rode superb in race two to withhold an attack from Plessinger to take a big win, especially after feeling unusually unconfident coming in to the outdoor season with Ken even saying himself he was surprised he could win the second moto! Roczen took second overall with Aaron Plessinger third overall in a class that seems like any of the top ten could win on their day but it was a bad day for Cooper Webb and Eli Tomac eighth and ninth overall respectively and defending champ Osborne 10th.

After qualifying fifth it was a frustrating day for Alessandro Lupino who had a bad start on the stock KTM in race one then crashed before DNFing his first AMA moto. That gave him an outside gate for race to put him at even more of a disadvantage and Lupino never saw the leaders on his way to a battling 13th, getting the better of former GP rival Max Anstie.