Renaux, Coldenhoff and Seewer on Arco 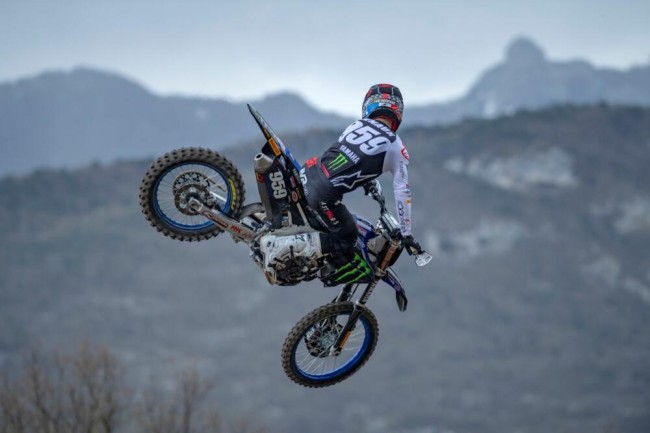 Monster Energy Yamaha Factory MXGP’s Maxime Renaux struck back at the fifth round of the FIM Motocross World Championship in Pietramurata, Italy. The rookie bounced back from a challenging Portuguese Grand Prix a week ago with a spectacular second-step podium celebration in Trentino – his third of the season. Jeremy Seewer almost made it a double-podium delight for the Monster Energy Yamaha Factory MXGP team but fell 2-points short of the box. He finished fourth, while Glenn Coldenhoff rounded out the top-five after his podium hopes were spoiled by two crashes in the second and final race of the weekend.

The MXGP of Trentino got off to a sensational start for the Monster Energy Yamaha Factory MXGP Team, with all three riders finishing inside the top five in the opening race. When the gates fell, Coldenhoff rocketed to the front and led 11 exciting laps ahead of the Championship Leader Tim Gajser.

After a thrilling race-long battle, ‘The Hoff’ was eventually pipped by Gajser and left to defend second position from a hard-charging Jorge Prado. He managed to succeed, securing a season-best second-place finish. At the same time, teammates Seewer and Renaux also got off to great starts and wound-up racing in a three-way battle for fourth position with Mitch Evans.

Evans dropped out of the challenge after 20-minutes, leaving the Yamaha stars to go head-to-head. Seewer managed to control the pace from fourth but eventually lost out to his young-gun teammate in the final throws.

The final race was marked by Renaux’s exceptional speed and mind-blowing race smarts as he patiently wore down a determined Seewer. After inheriting third position from Brian Bogers, the 21-year-old rookie bid his time for 11-laps before making a move on his highly experienced teammate to steal second place.

Still suffering the aftereffects of his fall in Argentina, Seewer accepted that his return to form will take longer than expected. The Swiss star still managed to finish third in the race for fourth overall, and despite narrowly missing the podium, he was happy to bank solid points.

The Pietramurata circuit was reversed for the MXGP of Trentino this weekend, and a 180-degree first turn was introduced. Getting through the first turn clean was the first major challenge of each race, and while all three riders were successful in Race 1, Coldenhoff was not so lucky in Race 2. In addition to his first-turn woes, the ‘259’ also had to deal with a minor technical issue as he pushed through the pack from dead last to finish 11th.

Now,the Monster Energy Yamaha Factory MXGP team will enjoy one weekend off before heading to the next round of the FIM Motocross World Championship that will take place in Kegums, Latvia, on the weekend of April 24th.

Maxime Renaux: “I am really really happy with this weekend and this podium. I would say it’s the best podium I’ve had this season because after Portugal, I had a few questions. So, to bounce back here, on a track that is not easy to ride on a 450 was really good. Today I took my time to make my passes, and in the end I could make it. This is not a track I always perform at; I had some tough rounds here last year, but I managed to get the title at the last one, so it is nice to come here, and to have these crazy fans back makes everything even nicer. I hope the fans in France are just as crazy!”

Jeremy Seewer: It’s definitely a lot tougher to come back from the crash in Argentina than I first expected. I just raced in Portugal to do damage limitation on the championship and take points and that worked well. This weekend, I tried to find my focus back, because before the crash, I was always there inside the top-three, and now I need to find that confidence again. It’s a tough way back, but I think I made the best out of it this week. I just missed the podium, which is fine, I am still on my way back, and now luckily, we have two weeks off to work towards 100% again.”

Glenn Coldenhoff: “I felt good right from the start of this weekend, always good with the lap times. Qualifying was really good, and then today pulled my first holeshot of the year and led for about 20 minutes in front of Tim Gajser. That was good and finished second after a really good moto. The second moto, my start was a little bit less and I crashed in the first turn. I was in a hurry to get back and then crashed again, and I also had a small technical issue. In the end, I finished 11th, which is okay in terms of points. Still, in the top-five is decent. I’m a bit disappointed, but it is what it is.”

Podcast! Jonathan McCready and Andy McKinstry discuss some great racing in Arco, the brilliance of Tim Gajser, Vialle taking the red plate in MX2, that Seewer leap and AMA supercross from St. Louis.

Listen here on iTunes or Spotify below: