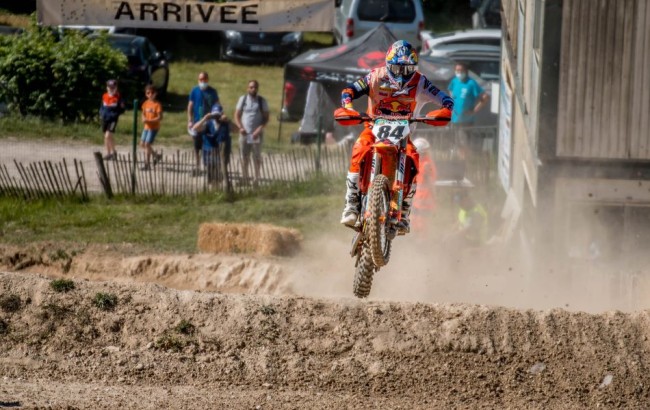 After the British Championship in Lyng last weekend, Jeffrey Herlings (Red Bull KTM) went to France with a view to the opening GP in Russia today. Although Maxime Desprey offered good resistance – he won the first moto – there was, as expected, no measure on Herlings. Jeffrey therefore dominated the second and third heat.

In Montgueux, to the north-east of Paris, Herlings found a very typical French circuit. Concrete hard and very slippery, making this an interesting training run for Orlyonok in fourteen days. French MX1 vice champion Maxime Desprey already showed in the morning that he would be the right man. Since Herlings did not lose the power of his engine properly, Desprey was able to take advantage. He turned it into a GSM Dafy Michelin Yamaha team party as Xavier Boog and Thomas Ramette finished 4th and 5th respectively.

The following motos did not involve many because four-time world champion Herlings clearly showed who is the boss. “It was (at first) quite difficult because we are not used to this kind of circuits. So hard and with a lack of grip. These are conditions in which the French drivers excel. It was certainly good preparation for Orloyonok. After the first heat we adjusted a lot because the engine was a bit too powerful for these conditions,” said Jeffrey, who was assisted on the podium by his assistant mechanic Ruben Tureluren who translated.

It was also a successful day for Desprey. He dropped to the grounds of UM Aube Montgueux as a dress rehearsal for the opener of the 24MX Tour next weekend in Ernée. If you want to watch the live stream again, you can go here. In addition to Herlings, Daymond Martens (Bud Racing Kawasaki) and Joel Van Mechelen also competed in France. Martens finished fifth each time and also finished fifth in the final standings. Van Mechelen recorded P7 and P8 in the two closing heats.