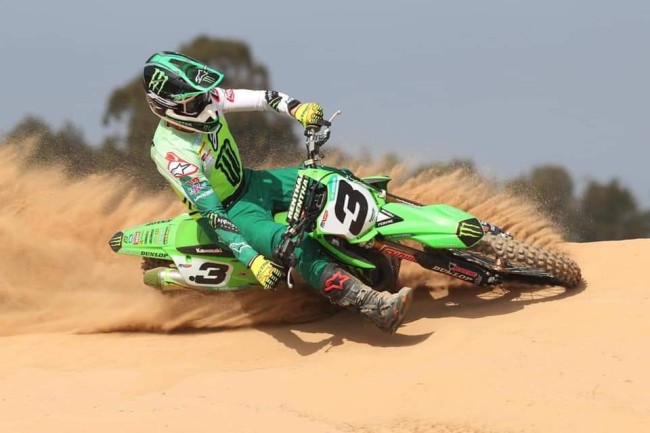 Jorge Prado took his customary holeshot and despite some early pressure from Romain Febvre, began to pull away from the Frenchman to cruise to an easy win. Prado admitted he was a bit tight in the early stages but got going halfway through race and says he is feeling very good on the 2021 KTM after working hard in the winter to improve the bike and his own physical condition.

Febvre revealed he had some problems with bad arm pump and stalling the bike dropped him back to riding to a safe sixth despite having the fastest lap of the race, leaving Glenn Coldenhoff to take second and a solid start to his Yamaha career.

An impressive Thomas Kjer Olsen was third and in the wheel tracks of Coldenhoff, the Dane admitting he needed a couple of laps to settle down in his 450 debut race before finding his rhythm.

Jago Geerts took the win but it wasn’t as easy as expected! Nicholas Lapuccci took the holeshot on his 250 Fantic two-stroke and set the pace with Red Bull KTM rookie Mattia Guadagnini in hot pursuit and Geerts steady away in third.

Guadagnini was pushing hard for a way by Lapucci but went down big time going into the corner and was lucky not to get injured! The young Italian got up only to go down again later but still took fourth.

Up front it was Geerts now on the tail of Lapucci but he wasn’t able to make the move until a couple of laps to go such was the impressive pace of Lapucci who would take a fine second after leading almost the entire race.

A calm and happy Geerts said he had some arm pump so waited to make the move because he wanted to make it stick when he went for the pass.

It was Jorge Prado edging into the lead ahead of Romain Febvre once again in the Superfinal and again Febvre put the pressure on early with the duo exchanging fastest laps. After the first five minutes, Prado began inching away slightly and looked to have the race under control until a mechanical took the Spaniard out of the race!

Febvre inherited the lead but was pushed hard by an impressive Thomas Kjer Olsen who passed Glenn Coldenhoff for second and was very satisfied with his impressive 450 debut.

Coldenhoff took third admitting he was happy just to get a podium in his first race for Yamaha saying he wasn’t in his top condition yet with the MXGP series not starting until May and he didn’t want to take any risks – but he was pleased to post the fastest lap of the race after admitting the leaders got away from him quickly in the opening laps.

It was an impressive debut too for Beta with Jeremy Van Horebeek riding well for fourth.

Nicholas Lapucci won the MX2 class with a great start that saw him battle Coldenhoff and Olsen for the first five minutes and he held on at the end for sixth just behind Monticelli and ahead of MX2 rivals Forato and Geerts, with a crash costing Geerts and a fast Guadagnini a chance at the MX2 win in the Superfinal on a very rough Riola Sardo circuit.