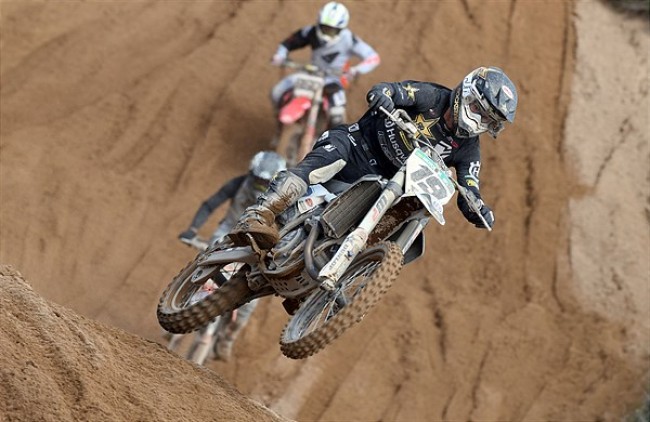 Nicholas Lapucci made good use of his pole position to take a holeshot and a dominating win in MX2 to the delight of the Fantic team who have struck gold with the signing of the fast-rising Italian star.

Behind him it was a big battle for second with an impressive Andrea Bonacorsi on the Hutten Metaal Yamaha barely holding off Tim Edberg who took third despite a crash earlier in the race. A determined Alberto Forato found his rhythm and pace on the GasGas as the race went on to step things up when Edberg passed him but ultimately took fourth behind the Yamaha duo.

Mattia Guadagnini came from a first turn crash to fifth in a strong ride and Jago Geerts did the same but was even further back in a very good ride to get back to sixth position.

Glenn Coldenhoff dominated the MX1 moto to take his first win on the factory Yamaha with Thomas Kjer Olsen again showing his 450 potential to take second position. Behind them it was Ben Watson who came through strongly in his first race on the 450 to take third and a podium, passing Monticelli and beating Romain Febvre in an impressive performance.

Monticelli took fourth with Febvre fifth and Van Horebeek another good ride on the Beta to keep the factory Kawasaki’s honest.

The action began instantly when Ben Watson hit the gate and Lapucci, Geerts and Guadagnini all ended up on the deck in turn one! It meant that Geerts and Guadagnini had to come from the back yet again in a tough day for the two factory MX2 riders. Geerts got back to tenth behind a fast Kevin Horgmo who took the MX2 win with Guadagnini 12th and Lapucci 13th. Watson meanwhile rode hard to get himself back to seventh on a track that wasn’t easy to pass on.

Out front it was Febvre in the lead from Coldenhoff with Febvre pulling away until he dropped it five minutes in allowing Coldenhoff back onto his rear wheel. Glenn stalked the Kawasaki rider and, when they got into backmarkers, the duo where right together and then suddenly Olsen caught the pair of them!

Already on a good pace, Olsen took advantage of the backmarkers getting in the way to make it a three way battle for the lead. He made the pass on Coldenhoff and then made the move on Febvre to take a brilliant win despite pressure from Febvre with the Frenchman again complaining of arm pump costing him the win.

Olsen however was delighted, and rightfully so with a brilliant win to show again that he will be a force to be reckoned with on the 450. “That was a little bit unexpected to be honest, admitted the Dane. “We did a few changes in the second moto and I felt a lot better. This was an awesome day for sure.”

A satisfied Coldenhoff said he had a good day with the opening moto win but said he didn’t feel as good in the second race so ultimately took it easy to get more data for the season ahead on the new machine.